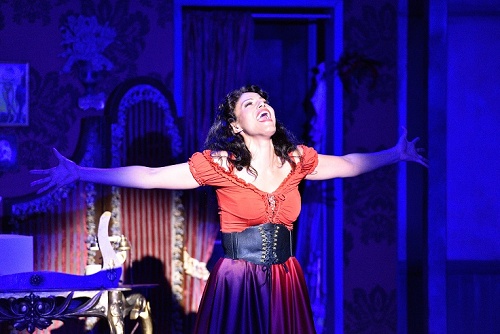 Under the nimble direction of Playhouse artistic director Sheldon Epps, this is a toe-tapping, smile-inducing throwback to a time when everyone had songs in their hearts, and a plot contrivance wasn’t a sign of weak writing, but a necessity to adhere to the rule of a big, sweeping musical, that—in the words of the immortal Bard—all’s well that ends well.

The story, for those who are not familiar, is a behind-the-scenes production of Shakespeare’s Taming of the Shrew. It’s a musical production that stars a divorced couple as the two leads. Fred (Wayne Brady) and Lilli (Merle Dandridge) are an embittered, disagreeable pair. And their backstage antics are, not subtly, mirrored images of the relationship between their onstage characters. This parallel allows the show to bounce back and forth from scenes on stage and off with ease.

The backstage action also deals with a young amorous couple, Lois (Joanna A. Jones) and Bill (Terrance Spencer). Lois is the type of girl whose eyes are quick to wander, and Bill is madly in love with her. The dynamic of new love, and its pursuit, plays off nicely against the sour after-effects of Fred and Lilli’s failed marriage.

However, it turns out that the animosity that Lilli and Fred have for one another may not stem from hate, but from a lingering affection that both have held onto. Lilli is the first to acknowledge such feelings when she receives a bouquet of flowers from Fred, flowers that were intended for a different woman. Fred allows her to believe they were meant for her, perhaps for the sake of harmony, and he tries to stop her from reading the card that came with them. Lilli holds the card, without opening it, in her dress, next to her heart. When she does finally read it in the middle of the production, it can be used as a cause for conflict and crisis. Again, we forgive plot contrivance when the players are wrapped in such sumptuous surroundings. Lilli’s anger bursts through while they are on stage, and when intermission comes, she makes the decision to leave the show. 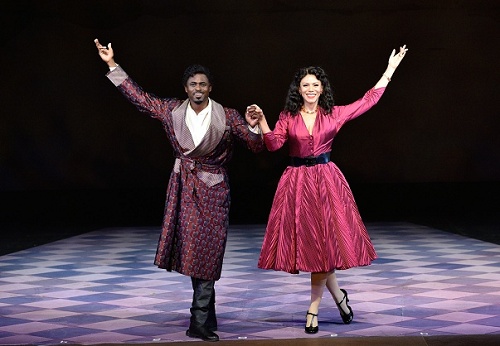 Enter the thugs. Now that Lilli has threatened to walk off the production, which would cause the cancellation of further performances, which, in turn, would financially ruin Fred, there is another big problem.  Two thugs (Brad Blaisdell and David Kirk Grant) who appear backstage before the show in Fred’s dressing room come bearing bad tidings. They have come to collect a debt from Fred, a debt that he cannot pay. A debt that he will only be able to pay if the show is a success. Therefore, Fred can’t let Lilli walk away from the show, and the thugs agree to help him, which lands them in the play-within-the-play, as escorts to Kate, dragging her kicking and screaming into every scene, a nice congruity from one play to the other.

Of course, all of this is set to the wonderful music and lyrics of Cole Porter. The music in this production, under conductor Rahn Coleman, has a nostalgic 1940s feel, with wonderful elements of jazz and blues that underpin the sensuality, romanticism, and sentimentality of a bygone era.

The opening number, “Another Op’nin’, Another Show,” was one of the musical highlights of the night. Jenelle Lynn Randall, who plays Hattie, hits this song right out of the park. She has such fun with it, as does the ensemble that joins her. Under the splendid choreography of Jeffrey Polk, it’s a joy-filled opening to a joyful show.

Other musical highlights include Kate’s solo numbers “So in Love” and “I Hate Men,” the first being a sweet, melancholic number that Ms. Dandridge handles exquisitely. The latter showcases the humorous diva that resides within the actress. For as tender as she is during “So in Love,” she demonstrates a humorous bravado and impeccable comic timing as Kate singing about how much she detests members of the opposite sex.

The number at the top of Act Two, “Too Darn Hot,” is another audience favorite. It’s a little bit of humor, a little bit of sex, and a whole lot of fun. Act Two is where “Brush up your Shakespeare” appears. This is one of the most famous songs from this musical, and one that is genuinely amusing. It is sung by the thugs, and it plays out like a standup comedy routine with set-up/punch-line material—and who doesn’t like a little Elizabethan wordplay?  Also in Act Two comes Lois’s solo number “Always True to you in my Fashion,” which is perhaps the musical highlight of the show. Joanna A. Jones not only hits every note right, but she sinks her teeth into the role of Lois so fiercely that this particular number raises her performance from strong to bravura. You will want to see more of her.

Director Sheldon Epps allows this to be a throwback. He keeps it authentically dated with sets, costumes, and exaggerated movements from some of his actors that play upon not only the sentimentality of the time, but the grandness of how we all view the past. It’s a larger-than-life feel that serves it well.

As Fred/Petruchio, Emmy winner Wayne Brady does a fine job with the character. He excels at the more humorous moments, and vocally he is superb.  He has an ease on stage that makes the character amiable and lighthearted, but it also means that he gets slightly overwhelmed by Merle Dandridge’s powerhouse performance. As Lilli/Kate, Ms. Dandridge is a force. She and Mr. Brady have a nice antagonistic chemistry, and vocally she is stunning.  It is the kind of performance that raises the entire show up. She is spectacular.

This production hits many high notes, and not just literally. This show marks the 8th annual Pasadena Playhouse Wells Fargo Theatrical Diversity Project fundraising event. And this show wonderfully celebrates diversity. The cast is almost entirely African-American, a fact that is only necessary to mention in regards to the theater’s diversity project. Someone unfamiliar with this work could walk away from this production believing it was written to be played this way. That speaks volumes to the production, and also to the beauty of Mr. Porter’s work.

*Note: This has a limited run, so get tickets now!

Kiss Me, Kate
By Cole Porter
Directed by Sheldon Epps