Music Gets Lost in Musical 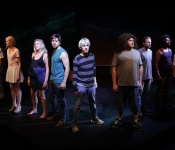 All six seasons of one of televisions most loved sci-fi dramas is condensed to a two and a half hour musical.

Your first thought is probably the same as mine: What, why? And now having seen Lost The Musical: We Have to go Back, which is playing through October 26 at the Lillian Theatre in Hollywood, I can honestly say, I don’t know. That is not to say that the audience didn’t have fun watching it, or that it didn’t have plenty of meta humor that totally relies on an audience having at least some knowledge of the show. So, if you’re not a Lost fan, most of the jokes will go right over your head.  But honestly, why would a non-fan have any interest in seeing Lost the Musical?

There is no need to give plot details,  it seriously follows all six seasons from beginning to end. Certain moments get more stage time than others, and some subplots are dealt with in one or two sentences. The moments that go fast, are invariably the best. When they describe an entire chunk of a season in a few lines, these were the funniest bits. And this show could have used a bit more fine tuning. It’s too long.

The enthusiastic cast dives into the material with a great deal of energy, and honestly they saved some of the more convoluted moments. And the style of acting that is required is broad reproductions of well-known characters.  Some of the actors weren’t quite able to mimic well enough for the audience to even know who they were until they said their names. But others, like Ryan Grassmeyer, who captured Hurley’s sarcasm well, and Randy Wade Kelley who exaggerated villainous Ben just right. Ben Burch also did a nice job with ageless, big eyelashed Richard. This play could have had a late-night cult theater feel had more of the characters been played more in the style of these three. 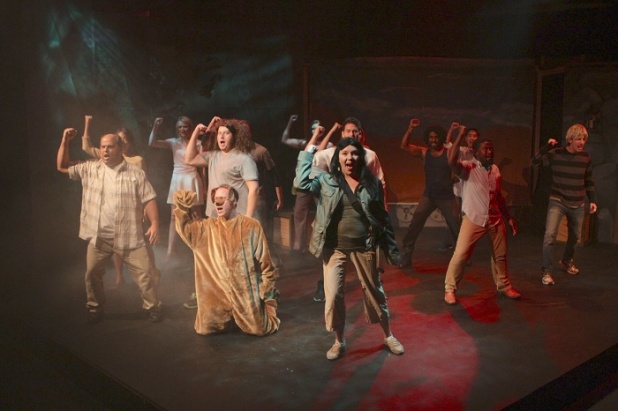 And then there’s the music. All of the songs are reworded classic songs like Thriller, American Pie, and Don’t stop Believing. All of the songs were sung badly, which in a play of this style is fine, it could actually become part of the humor. And it might for this show, but I was unable to hear about seventy percent of the lyrics because the singers were really quiet. So, if they raise their volume it might work, but as it stands now, this would have been funnier without the music.

In the end,  it’s a crowd-pleasing (at least on opening night), absurd bit of fun, that maybe stretches itself thin by being so lengthy.  It’s probably not a show for the discerning theatregoer, but I can’t imagine that was the intention of the creators. Writers Steven Brandon and Steven Christopher Parker are clearly huge Lost fans–opening night for this show was on the exact ten year anniversary of the premiere of Lost–And like most fans of the show, they have an issue with the ending. Therefore, this play offers three alternative endings, and the audience gets to decide which one they will see every night.

So, if you are a fan of Lost and find that you have a yearning to see the entire series condensed into one ridiculous musical, then this is your lucky day. It’s also important to point out that 5% of all ticket sales will be donated to Cancer Gets Lost charity. For more info go to http://www.cancergetslost.com.

Lost the Musical: We Have to go Back