The indescribable ecstasy that accompanies artistic fulfillment is a sentiment that is beautifully presented through dance and lyrics in La Mirada Theatre for Performing Arts and McCoy Rigby Entertainment’s production of Billy Elliot The Musical, playing now through February 8. Those who are familiar with this particular show, or with the film, will know is that this is the story of a young boy, Billy (Mitchell Tobin), and his desire to become a ballet dancer against all odds.

Set in a northern English mining town in 1984, during a miners’ strike, Billy’s dream of dancing flies in the face of what a young boy in that time and place would conventionally be allowed to do. In fact, he and his friend Michael (A wonderful Jake Kitchin) are taking boxing lessons in the beginning of the play, and for different reasons are miserable doing so. Enter Mrs. Wilkinson (Vicki Lewis), a local dance teacher. Billy stumbles upon Mrs. Wilkinson’s ballet class, entirely made up of young girls, and insist he join in if he’s going to watch. Billy of course does join and turns out to be remarkably talented. Mrs. Wilkinson then helps Billy prepare for an audition to a dancing school. That is until Billy’s Dad (David Atkinson) finds out and forbids Billy to continue dancing. 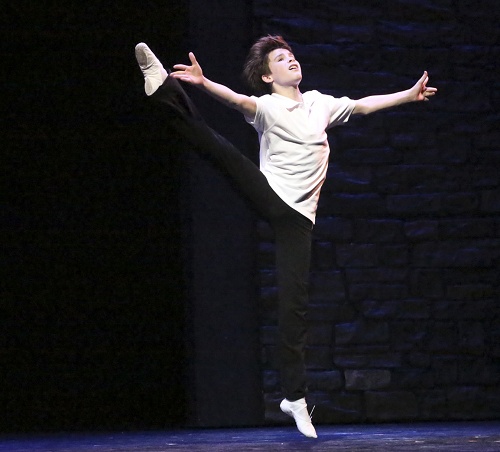 Billy is faced with the dilemma: continue to dance and defy his father, or conform to the person he thinks he should be. The musical, though a bit overlong before getting there, is a nice statement on the importance of being true to yourself. The setting of a small English town in 1984 allows for the topic of a boy interested in ballet to be a bit more controversial than it would be otherwise, but it also allows the playwright to create moral lessons that some of the minor characters learn about acceptance, bigotry, and self-expression that smoothly contrast the backdrop. All set to music by Elton John.

This production is ambitious. The large theater allows for a Broadway-style production, and that is exactly what it goes for. And for the most part is a resounding success. Director Brian Kite knows how to blend all of the elements seamlessly for a smooth, glossy, big-budget musical that also, at times, feels like an intimate story. A tricky balance that allows the production to switch gears, without jarring or disassociating either the narrative or the production itself. So it can be touching, funny, poignant and awe-inspiring, sometimes within seconds of itself.

The musical numbers also run the gamut from large-scale to intimate. Numbers like “Shine” and “Solidarity” have that big production feel, where numbers like “The Letter” and “Electricity” are much smaller in scale, though rise to the heights evocatively. Choreographer Dana Solimando is competent enough for the large scale numbers, but really shows remarkable insight when it comes to Billy himself. “Angry Dance” and “Electricity” in particular, present the internalized emotions of the boy, and manifest them into the moment, and both are highlights because of it.

This is not to discount the incredible performance of Mitchell Tobin as Billy. His ability to feel his way through a dance number is astonishing. His dance through the song “Electricity” was, in fact, electric. The song is Billy’s explanation of what he feels when he’s dancing. Impossible to put into words, turns out to be the answer, “I don’t know what it is, it’s hard to tell.” But, he does go on to say, “Suddenly I’m flying, flying like a bird.” There is a sense of exhilaration and total joy involved. There is also a bit of art imitating life, at least on opening night, when young Mr. Tobin finished his “Electricity” number he was forced to hold his final pose for an extended moment as the audience roared and cheered for his masterful performance. He completely transported us to that place in ourselves that knows the boundless joy of being completely enveloped in doing something we love. There was a moment, in that extended applause, which allowed the young actor’s face to be filled with the exact kind of fulfillment that the song is all about. He was actually living the moment, and it was a beautiful and rare moment to witness.

The rest of the cast, without exception, is first-rate. All of the technical elements of this show, the costumes (designed by Ann Closs-Farley), the lighting, (Steven Young) sound (Josh Bessom) and scenic design (Stephen Gifford) are all equally impressive in their scope and precision.

There may be some muddled accents here and there, and a few issues with sound, where it was difficult to hear everything being said, the production, however, never waivers and is nothing short of an extraordinary and grand spectacle.

Book and Lyrics by Lee Hall