Set in a high school gymnasium, La Mirada has transformed its theater to become a slightly immersive and much more intimate space for the bloody tale. The hallway that you walk down to get to your seats, which are high school football-style bleachers, is a post prom night, havoc-run hallway at Thomas Ewan High. Waiting in line to enter the theater was rather akin to waiting to enter a haunted house. Which raises the stakes of the production even before it’s begun. A wise call on the part of the production team since the first act of the musical itself feels like a tease. A long tease. We all want to get to the prom, and taking almost two hours to get there, sets up quite a big expectation, and luckily, this production doesn’t disappoint.

Poor Carrie White (Emily Lopez), the scorned pariah of Thomas Ewan High, who’s abusive, religious zealot of a mother (Misty Cotton) has browbeaten, and probably actually beaten—and maybe even attempted to exorcise—any semblance of normality from the poor girl. Oh, and then there’s the whole she has psychokinetic powers thing. So, yeah, life is not easy for seventeen year old Carrie. She spends her days as the main object of ridicule at school, which comes mostly in the form of mean girl Chris (Valerie Rose Curiel) and her ilk of mindless followers. Pretty typical high school stuff. That is until an incident in the shower crosses a line, and gym teacher Miss Gardner (Jenelle Lynn Randall), steps in to protect Carrie and to force the other girls to apologize to her. When Chris refuses to apologize, Miss Gardner bans her from attending the prom, and Chris, who blames Carrie for it, seeks her revenge. Something to do with a farmer’s pig…prom night. You know, that old chestnut. Meanwhile, nice girl Sue (Kayla Parker) feels overly remorseful for the mean things that have been done to Carrie, and so she gets her boyfriend, star football player Tommy (Jon Robert Hall), to ask Carrie to the prom as a gesture to make up for all the mean things that have been done to her over the years. Tommy asks, Carrie accepts, and we’re all set to go to the prom. Oh, except for the whole Carrie’s mom has decided that she’s a witch and needs to be killed subplot, which we’ll come back to.

Prom night. Venetian theme. Carrie, all in white, of course, she dances for the first time, is voted prom queen, and all her dreams come true…? Yeah, let’s go with that. 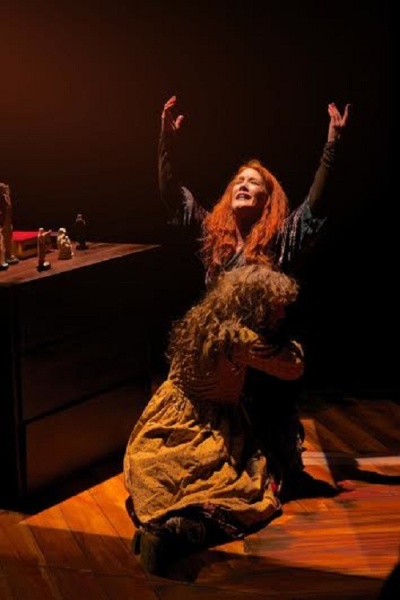 This production is fun. A lot of fun. It’s a glossy, over-the-top, sometimes sappy, but ultimately visually impressive reinterpretation of the first musical, the film, and the book. Director Brady Schwind, along with writer Lawrence D. Cohen, has a lot of source material from which to draw, and for the most part they keep it focused and stop it from becoming the convoluted mess that it probably should be at this point. Which is quite the directorial feat. The audience immersion elements are a bit of a gimmick, except the fabulous hallway leading to the theater, which was just cool. The other elements, which I won’t give away here, worked for the first few times, but quickly felt like nothing more than a device that was less necessary and more perfunctory. But I suppose in a case like Carrie The Musical, excess is kind of apropos. The converting of the theater into a high school gymnasium was a great call, and scenic designer Stephen Gifford gets it exactly right. Brian Gale’s lighting design, likewise, is right on the money. Cricket Myers does great things with her sound design, particularly when the ground seems to rumble from the sounds created by Carrie’s “powers.” And a special shout out has to go to Jim Steinmeyer, who has the coolest title I’ve ever seen in a program, he is the illusion designer. I know, right! And his illusions were designed and executed stunningly. The moment with the candlestick, or at the end with the tiara was indeed illusive, but oh so convincing.

This cast is a knockout. All across the board. Misty Cotton as Margaret, Carrie’s mom, creates a slightly more sympathetic, less severe character than did the brilliant Piper Laurie in the film version. But the alterations in the character ultimately were great choices, lessening comparisons, and making it her own. Kayla Parker is wonderful as Sue, the nice girl. Valerie Rose Curiel is equally great as Chris, the mean girl. But this is really a vehicle for the actress playing the title role, and Emily Lopez is bloody terrific (I had to get one in). She gets Carrie. As terrifying as that idea might be. She is evocative and sweet, with just the right amount of underlying homicidal rage to create a compelling and virtuoso performance. Why else would the audience applaud as Carrie commits atrocities against her fellow students? Because they kind of have it coming, and because we’re totally on her side. Which should probably make us question our own morality, but it’s Carrie The Musical for crying out loud!

The only element of this musical that is a bit of a disappointment, at least to this guy, is the fact that the approach to the material is a faithful adaptation. It seems that there is a satirical, cultish element that could have raised the level of fun from entertaining to riotous. It takes itself awfully seriously. As do the songs (music by Michael Gore and lyrics by Dean Pitchford). Some of the songs feel as if they were pulled from a Disney musical, and that sort of lessens the stakes of a musical about a girl who gets pushed to the brink of madness and destroys a school, killing most of her classmates. I’m just saying. I didn’t want to take this too seriously, but the production kind of demands it sometimes. Luckily, it’s always engaging to watch the dynamic cast, and the climactic prom scene is pretty badass. Plus, it has the added bonus of maybe making some people think twice before resorting to being a bully. And we should all love a good resonating moral.  In the end, minus the moments of histrionic speechmaking, of casually inserted ethos, and a couple songs that refused to end when they clearly should have, it is a blood-spattering triumph. You should definitely invite someone you love (or hate, it works both ways) to go to this prom with you.

And the Transfer Group