American Idiot: This is Our Youth

By Patrick Hurley
Green Day’s rock musical American Idiot comes to vivid life in Doma Theatre Company’s high-octane production at the MET theatre, playing now through July 26. Based on the Grammy-Award winning album of the same name, the musical tells the story of three young men who embark on their adult lives in three very different ways. Each in the pursuit of happiness, in the youthful haze of sex, drugs, and rock and roll, the three find escape from suburbia may not be all they dreamed. 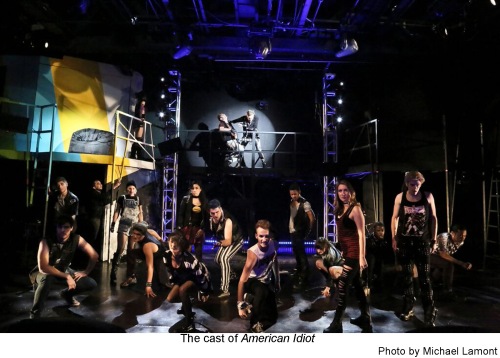 Johnny (Jess Ford), Tunny (Chris Kerrigan), and Will (Wesley Moran) are each on the precipice of adulthood, hanging on to the last shreds of the irresponsibility of youth. They’re all on that fine line that dances between responsibility and recklessness. Fueled by rage against the establishment, middle fingers fly up all over the place, the three journey down the road to adulthood with very different results. Johnny finds love, drugs, and music. Tunny enlists in the army, and Will settles down with a wife and a kid, and a really big bong. The angst is brought about by the realizations that what we dream our lives to be and what they turn into are often times not in line with each other.

Johnny falls in love with a girl (Renee Cohen), but is more taken by a flamboyant drug dealer named St. Jimmy (Andrew Diego). His downward spiral is nicely realized through the music. All three men face the harsh realities of life through the melancholic music of Green Day. And all three stories culminate in the bittersweet refrain of “Wake me Up When September Ends.”

The MET theater is a small space for such a large show, but this production makes the absolute most of it. Director Marco Gomez keeps things simple. Set designer John Lacovelli does great things with the small set that is strangely, but wonderfully reminiscent of some kind of Brechtian rock concert. The band is upstage for the entire show, the actors change costumes on stage, and some of the ensemble members play several roles. This hyper-theatricality enhances the experience by inviting us into the theatrical world. The lighting and projection design by Jean-Yves Tessier is wonderful. It was especially inventive having all the monitors hanging all over the stage. The tone of the piece is a tricky one, but this production makes it all smooth. It shifted from rock concert to rock opera with ease, thanks, in no small part to clever lighting design.

The entire cast dives in with tremendous energy. Jess Ford is fantastic as Johnny. He is grounded and genuine, and his vocals are wonderfully suited to the material. And then there’s the music. 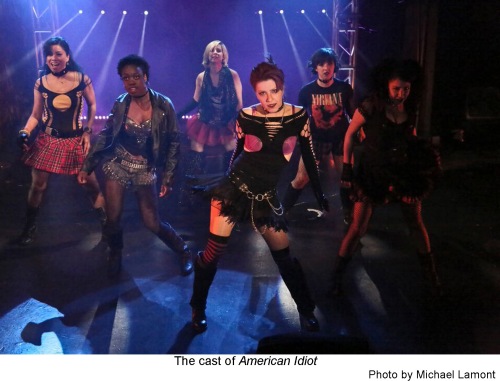 The music is loud, and some of the lyrics get drowned out, but the music is great so it’s forgivable. Most audiences will know a good number of the songs already anyway, so the dropped lyrics are easy to forgive. The music by Green Day with lyrics by frontman Billie Joe Armstrong is almost nonstop. Most of the songs use anger, regret, love, and indifference, and it’s so constant and one song just goes almost right into the next to make this a true rock opera. There is very little dialogue apart from the music, and the story moves surprisingly well through all of these seemingly connected songs. Hits like “Holiday,” “Boulevard of Broken Dreams,” “21 Guns,” and of course “American Idiot,” are all easily recognizable and are staged strongly in this production. Particularly “Holiday” which has the cleverest choreography of the night. Other standouts are the evocative “Are we the Waiting,” and “We’re coming home Again.”

In the end, this is a really fun, high energy production. The music is great, the staging is fluid and clear, the cast seems to be having a good time, and there’s even a little lesson to be learned. It doesn’t carry much dramaturgical weight, but it’s not trying to. What’s it is doing is having a hell of a good time. And that certainly makes it worth a look.

Thanks for the memories and the new adventures.