Shiv Sublimely Soars to the Stars and Back

By Patrick Hurley
How do we reconcile the past? How do we see beyond our own liminal understanding of the world? Our grandiose ideas can be easily quashed by the exquisitely tiny amount of space that we take up in the universe. And yet we still seek for something new. And so we should. In the eloquent (paraphrased) words of Tennyson, we should “strive, seek, find, and not yield”. Aditi Brennan Kapil’s play Shiv, playing now at The Theatre @ Boston Court takes the idea of this self discovery, and places it in a surreal, post-colonial, post-modernist setting. It gently dances with the themes of loss, identity, and culture while maintaining the narrative of a beautifully nuanced relationship drama between a father and daughter. 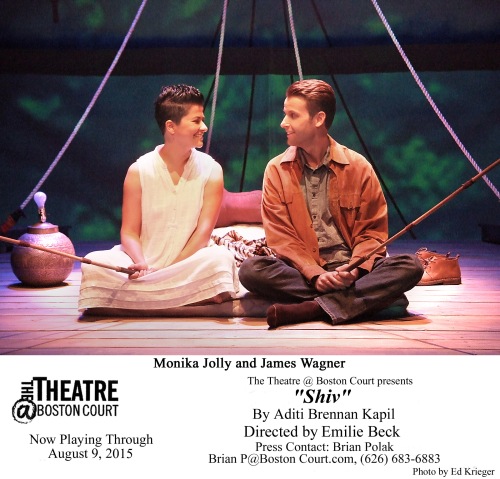 Sailing the cosmic ocean on a sofa bed mattress, with a kite for a sail, Shiv (Monika Jolly) proudly tells us, the audience, that “this sixty by eighty inches of foam and fabric” is all she has. She does also have an antiquated battery-operated radio of her fathers, a memento that later comes to great significance. The story begins when Shiv swims to the shore of a wealthy estate to apply for a job that she saw a posting for at a hardware store, and when she arrives she meets the Estate owners nephew Gerard (James Wagner), and the two strike up a friendship. A friendship that starts to turn into something more. There is a hesitancy on Shiv’s part to take the relationship further because of the memory of her father. The story blends flashback scenes of Shiv and her father Bapu (Dileep Rao) with scenes between Gerard and Shiv in the present day. It also includes moments of fantasy, where Shiv takes to her mattress which she tells Gerard is “imbued with magical properties,” and they sail on the cosmic sea to fish for Pisces. All of these different scenes blend together seamlessly, there is a dreamlike quality of past, present, and future blurring together in one stunningly created version of “now”. A present moment experience that is truly unique to the telling of Shiv’s story.

The play borrows ideas from the Hindu mythology of Shiva, “the destroyer god”. He is the destroyer of creation, ignorance, and misery. It is said that he destroys all of creation every two or three billion years so that he may start over and re-create it all. So, he is not only responsible for destruction but for rebirth. The beauty of this metaphor, for the purpose of this story in particular, are the parallels between the destruction of self, identity, culture, and the past, with the shedding of old habits, attachments, and beliefs. It is through the destruction of our past that we are able to rebuild. To become someone new. This is where the post-colonialism meets the post-modern fantasy. Through Bapu’s dislocation, an Indian in America struggling with the disenfranchisement of his own people, his sins are visited upon his daughter. Shiv is a product of an assimilated generation, she has lost much of her cultural past, and so she is the embodiment of the American dream. A dream that has led her believe, as we Americans do, in a limitless future. This play deals with that moment in the middle, in the subconscious landscape of what was, what is, and what could be. Shiv is caught in a struggle for identity and meaning. 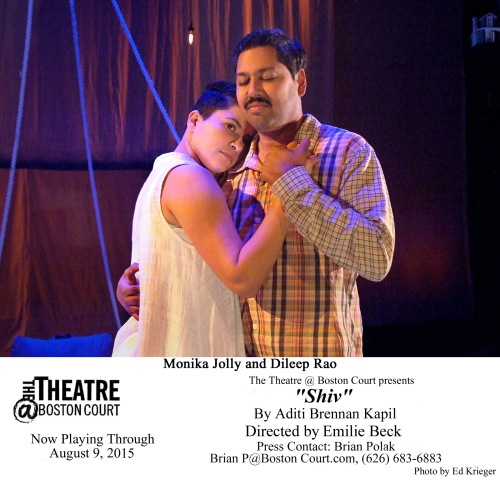 This production is gorgeously designed, scenically by Stephanie Kerlet Schwartz. The lighting and video designer Tom Ontiveros added wonderfully dreamy elements, particularly the video projections. And Jack Arky’s sound design allowed for specific moments, especially the cosmic sailing scenes to soar beyond expectation. Director Emilie Beck keeps it all simple and allows for the character development by the actors, and the wonderful lighting and sound elements to elevate this show. The play moves like a dream. The small four person cast is exceptional.

Monika Jolly is a revelation as Shiv. She is able to exist in the past and present without betraying one or the other. She allows two versions of Shiv to co-exist and she never misses a beat. She exudes wonderment and loneliness, strength, and an inquisitiveness that makes her a true explorer. Dileep Rao gives an incredible performance as Bapu. He is genuine in his affections, rock solid in his convictions, and his tenderness toward Shiv is utterly heartbreaking at times. Together, these two actors create a bond between father and daughter that gives the play a stunning final image that will linger in the mind of audiences for a long time.

This play should not be missed. It is filled with humor and poignancy. It asks big questions, and tackles death, love, and identity. And it has cosmic sailing! What more could anyone want from a night in the theater?