By Patrick Hurley
The biblical story of Adam and Eve is given a farcical twist when Satan interferes with God’s plan, and creates Steve ahead of Eve.

Leaving Adam with a confused sexuality, a pair of lovers who fight over him, and a battle between God and the Devil, all set to music. Thus is the new musical Adam & Eve and Steve,  Scott E. Lambert & My Monkey Productions is presenting this world premiere now through August 30 at Theatre 68 @NoHo Arts Center.

Chandler Warren has written a light-hearted, frothy musical aimed at a mainstream audience with broad humor, silly antics, and topical references (though the Joan Rivers one feels dated). It is not about theatrical artistry, nor is it a deeply realized musical event. No, this is just a bit of fun. And it definitely delivers some laughs. The actors are all enthusiastically energized as they sing and dance their way through the 80 minute show. And all of them are seriously good singers.

Michael Spaziani as Adam, and Kelley Dorney as Eve are really great singers. Their vocals are almost too large for the small theater. They both embody the right amount of camp and sincerity that the show calls for. Jotape Lockwood is hilarious as Steve. He plays up stereotypes, and goes for easy laughs, but he also knows how to work a crowd. He hams up enough to establish himself as the standout in a cult production, a production that would be better suited, perhaps, as late night theater. Throw in some audience participation, and a c 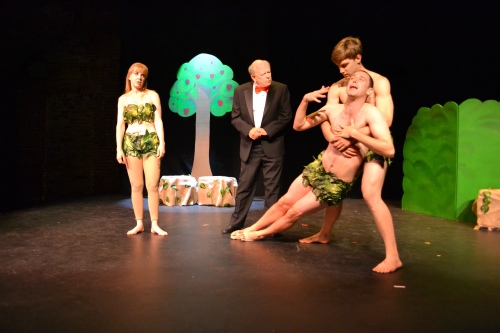 abaret-setting where the patrons can drink during the show, and this would run for years. As it stands, it’s a highly entertaining divergence. The theatrical equivalent of a hot fudge sundae.

Director Ronnie Marmo could have actually had more fun with the staging. There is a stagnancy to it at a certain point that shouldn’t have been. Also, the blackouts were a mistake. This is not the kind of theater in which you want to slow down the momentum. That said, this show doesn’t try to take itself seriously, and that is worth at least a tip of the hat. The fig leaf loin cloth costumes were terrific, especially because they were worn by three actors who wore them well. And there must be a shout out to Tim Drier for his appropriately horrible set design. It was perhaps the best worst set ever. It felt like really bad high school, nay junior high school theater.

In the end, this is a fun show. It won’t change your life, it won’t make you realize the brilliance that theater is capable of, but it might make you smile, and there’s nothing wrong at all with that.