When it Finds its Focus, Bent Becomes Beautiful

By Patrick Hurley Taking its cue from the gay rights movement of the late 1970s, when it was written, Martin Sherman’s play Bent, playing now through August 23 at the Mark Taper Forum, wants to make a statement to the gay community. 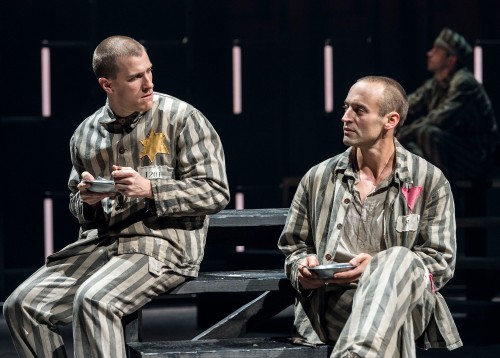 The play does this by highlighting the struggles of gay men living in Nazi Germany at the start of the second World War. While this production seems to be a living memorial to the gay men and women who died in the holocaust, the written play wants to be a political piece targeting self-acceptance throughout the community. This production holds strong to both elements, and is slightly muddled because of it. However, it rises to something above average thanks to the wonderfully staged and beautifully performed second half. The play is fractured into two separate narratives. The first deals with Max (Patrick Heusinger) and his boyfriend Rudy (Andy Mientus) going about their lives just as the Nazis are beginning to arrest and round up known homosexuals in Berlin. Forced to go on the run, and failing to find solace from drag queen Greta (Jake Shears), whose only advice to the pair is that they should start pretending to be straight, Max and Rudy are eventually arrested and put on a train to a concentration camp. On the train, when confronted by the Gestapo, Max takes Greta’s advice, and does whatever he has to do to be seen as straight, in order not to be labelled with the dreaded pink triangle that will announce to everyone that he is queer. The second half of the play takes place in the concentration camp. Max gets put to work moving rocks from one pile to another, and then back again, and he maneuvers to get a co-worker, a gay prisoner named Horst (Charlie Hofheimer). The two soon fall in love, and have to explore this love under the watchful eye of guards who are ready to shoot and kill them if they stop working. It is in the exploration of this love, the need to find humanity in the most inhumane of possible circumstances, that this play truly excels. It basically becomes a two-person show about the need for love, acceptance, and the will to survive for both.

Director Moisés Kaufman creates a fluidly staged first half. Highlighting dramatic elements through scene changes and a musical number,  complete with wonderful set and costume pieces by Beowulf Boritt.  The first part, however, moves a bit sluggishly, the scene changes take a little too long, and the scenes themselves are written in such a way that they are extended a bit beyond what is necessary. It feels a little flimsy. However, once the set changes to the concentration camp, which is a spectacular visual, this play becomes a tightly focused drama. Mr. Kaufman handles the second part like a master. The repetition of movement, the nearly bare set, the simplicity of it all gives it a depth and power that is sadly lacking from most of the first half, which is, because of the writing, overloaded with too many ideas. The cast is mostly solid throughout, but due to the nature of this show, Max and Horst are the only characters that truly standout, and both actors deftly handle them.  As Max, Patrick Heusinger conveys deep desire and pain through his inaction and mournful silences. He evokes sympathy through his hopeful resilience, and empathy through his desire and devotion toward Horst. As Horst, Charlie Hofheimer is marvelous. He is able to let us see an entire world within Horst. His glances give away his secrets, and we understand who he is because he doesn’t withhold anything he doesn’t have to. The scenes in the concentration camp are so riveting because both of these actors have to physically ignore the other, and so the most subtle things, the looks that both actors are able to sneak in, the expressions filled with every conceivable emotion have to be so delicately handled, and such moments become things of beauty. This production, while flawed in its overcomplicated structure, turns into a wonderfully staged, beautifully performed slice of humanity. A piece that wants to make a political statement, a statement meant to bolster a disenfranchised community. But what’s perhaps most fascinating is that now, in the year 2015, the political agenda feels very dated, and when the show switches tone from political to personal it comes to life. It’s not in the macro, but in the micro that a much bigger statement is made. That even in the face of the unimaginable, we find strength in one another. And all we need is love.