By Patrick Hurley
The idea of updating, modernizing, and reimagining Shakespeare’s plays is nothing new. And for the Yale Repertory Theatre Production of These Paper Bullets, Presented at the Geffen Playhouse in association with Atlantic Theater Company, with its self-proclaimed “modish”ness, is an updated, kind of modernized, somewhat reimagined Much Ado About Nothing, and the whole thing is a frothy, watered-down, clunky affair.

Taking the love stories from the classic Bard comedy, and placing them in a story about a fictional 1960s rock group, “The Quartos” a mop-topped rock-n-roll foursome from Britain (yes, it’s supposed to sound familiar), and then mixing 1960s colloquial dialogue, costumes, and music, along with actual lines from the original Much Ado play, and then attempting to satirize both the Shakespearean text and the 1960s, in a weird Austin Powers/Elizabethan hybrid, slapstick comedy…Yeah, it get’s clunky.

For anyone not familiar wit
h Much Ado About Nothing, the piece may come across as a bit more clever than it actually is. For all of the moments that seem to work best, are the ones that stick to the original material. For example, the scene where girlfriends of Beatrice (Nicole Parker) play a mean prank on her to convince her that the sharp-tongued Ben (Justin Kirk) is actually in love with her, is perhaps the most successful scene of the evening. It plays out very true to the original. The plot contrivances, and all of the comedic reveals are from the original play, that this play accuses itself of “ripping off.” Perhaps it would have been better to simply place  into the 1960s, rather than trying to add updated dialogue. The music, likewise, while not without merit, feels more a gimmick than anything else. It is a nice showcase for composer Billie Joe Armstrong, who has written some lovely Beatles ripoffs, but whose purpose feels only to demonstrate Mr. Armstrong’s ability to write songs in the style of the 1960s.

The script, or rather, some of the script, was written by Rolin Jones. And while it is a strange mix of modern with the original, mostly intended, it seems, to provide a more accessible version of the story to a younger audience, what happens is that the beauty of the language gets weighted down by the colloquial humor, and so the poetry becomes somewhat trite. The heightened use of modern day humor even pulls away from the 1960s, because it’s a satirical comment on an era, using a modern day focus. So, the blending of language from early modern English, the groovy lingo of the 60s, and the contemporary author’s pointed mockery of both…Yeah, clunky. 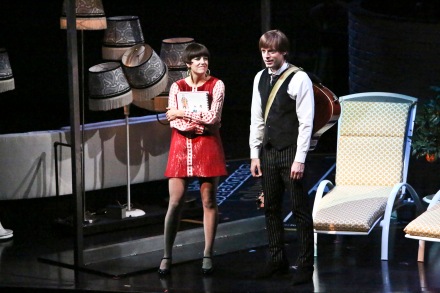 Director Jackson Gay does a lot with this show. The revolving set, designed by Michael Yeargan, which was too loud, and served as a distraction, at least in the front five rows, simply rotated too many times. The play moved from set to set at a frantic pace. The nature of this style of comedy made the transitions work a good deal of the time, but sometimes moving from a hotel room to a balcony right off that room and then back to the room, made the rotating stage feel a bit overused. The costumes, designed by Jessica Ford were wonderful 1960s throwbacks, and gave the characters the distinction of their era. It was more Austin Powers than Mad Men, but that’s probably exactly as it should be.

The cast does a great job holding this show together. Specifically Nicole Parker, whose Bea glows with acerbic feminist strength. What’s really great about her performance is that she finds a way to really hold onto her individuality, standing strong as a woman, rather than fawning over her need for a man. Damon Daunno is also very good as Claude. His innocent adulation for Higgy (Ariana Venturi) makes him extremely likable and easy to root for, even when he disgraces his love on their wedding day.

Overall, this production tries very hard, and the result is a mixed bag. Perhaps it’s trying a bit too hard. It never really finds it groove and settles in. However, there is plenty to enjoy, and the actors all seem to be having a great time. So while it may be a bit of a clunky night, at least it’s one you can chuckle through.

The Yale Repertory Theatre Production of:
These Paper Bullets! A Modish Ripoff of William Shakespeare’s Much Ado About Nothing.