Awake is too Prosaic to Sing

The immutable hope for the American Dream to endure is alive and well in Awake & Sing! The revival production, playing now at the Odyssey theatre. Written in 1935 by Clifford Odets, it follows three generations of a Jewish family living in a small Bronx apartment during the great depression. 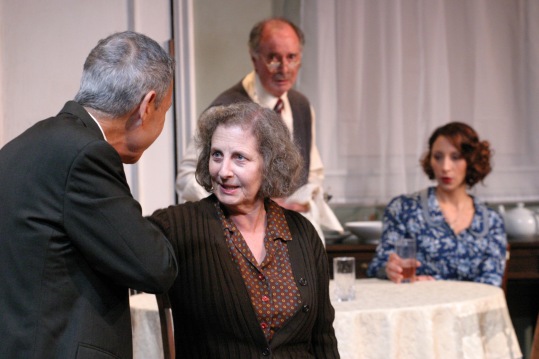 Matriarch Bessie (Marilyn Fox) has high hopes for her family, and a slightly diluted perception of the reality she exists in. Hers is a world of struggle, where fewer and fewer opportunities are knocking on the doors of lower-class Americans, yet her need for the appearance of respectability and dignity are her driving force.  Odets approaches, but waters down the illusion vs. reality theme through the character of Bessie, he stops short because of the limitations he places upon her through his own misogyny, an effect, no doubt, of the time he lived in. She is almost always at the mercy of a man.  At one point Bessie claims not to understand financial or business matters, because as she says, “I’m a woman.”

This brings us to her daughter, Hennie (Melissa Paladino), who we learn at the beginning of the play is in “trouble.” She’s unmarried, unengaged and pregnant. The circumstances are surely enough to ruin her should she not find a man and get engaged quickly. The father of her child, a boarder in her house named Moe Axelrod (Jason Huber), seems to have no interest in her, which leaves her broken-hearted and angry for most of the play. Bessie hatches the plan to have Hennie basically trap an innocent foreigner named Sam Feinschrieber (Cameon Jappe), a young man who is clearly desperately in love with Hennie, into marrying her. Problem solved.

Or is it? This melodramatic subplot stays on the back burner until Act three when it becomes the catalyst for Odets’ theme of the young having the only chance for hope in the new economically broken, industrially evolving country.

Bessie’s son Ralph (James Morosini) falls in love with a girl of no means, and wants to bring her to live with them. Bessie, in her need to keep up appearances, rejects the idea, rejects, in fact, his entire infatuation with such a common girl. She refuses to see that Ralph is no more elevated in society than the girl loves.

Then there’s Bessie’s father Jacob (Allan Miller), A wise and compassionate older man. The one who holds onto old values and beliefs while simultaneously pushing the young characters toward a better future. He is a complete victim of his age in a time when modernity was akin to destruction. And the shadow of doom inevitably follows him from the start.

Indeed this play can be tracked by the amount of hope there is for each of the three generations of characters. Jacob, the eldest, has no hope of achieving anything better in his life. Bessie and her contemporaries Myron (Robert Lesser) and Morty (Richard Fancy) try to hold onto the hope that their lives can still be something better. And Hennie and Ralph, the youngest, are the only ones for whom any hope can endure.

The literary Modernist movement, which Odets wrote most of his plays during, sees the ever-progressing industrial world as a villain.  Writers like Steinbeck and O’Neill were able to create searing portraits of the reality of the American dream gone awry. They richly layered their works with thematic development, and multi-faceted characters whose struggles transcended time through their utterly damaged humanity.  It was because of these writers that playwrights like Tennessee Williams and Arthur Miller expanded on the destruction of the American Dream in incomparable ways. Odets was much more interested in characters complaining about their situation. And while his play Waiting for Lefty is an agit-prop classic. This one carries less weight because it tiptoes too lightly through the reality these characters are facing, and falls to readily into shouting melodrama.

This production, however, stays remarkably true to the eighty-year old material. The set, designed by Pete Hickok is smartly simple. It makes nice use of the space. Same goes for the costumes, designed by Kim DeShazo, they felt time appropriate and never pulled focus. Director Elina De Santos doesn’t allow the play to ever feel too stagnate, which is something to say for a period piece that runs two and a half hours in length. And the entire cast does a great job of inhabiting the period with honest characters. Specifically, James Morosini, who gives the evenings most vivid performance. His Ralph is embued with a passionate intensity and hope that keep him the most interesting character to track throughout the story.

In the end, this is a fine, if a bit lengthy,  production of a somewhat underwhelming play.