If Sartre’s idea of hell is other people, playwright John Patrick Shanley dives into the idea that limbo is a desperate need for other people. Savage in Limbo, presented by the newly formed Sixty-Six Theater Co. and playing now at the Marilyn Monroe Theatre in West Hollywood, is part naturalism, part surrealism, and part melodrama. And tackles the idea that it’s a helluva lot easier to change if you don’t have to do it alone. 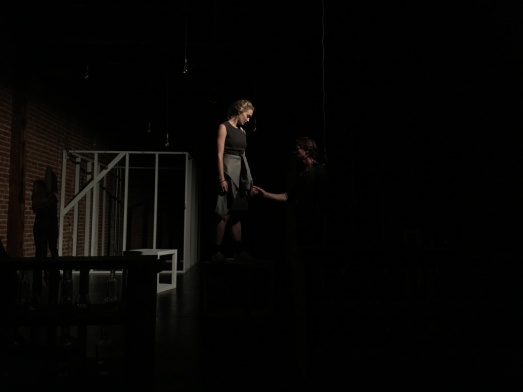 The play takes place in an ordinary bar, on an ordinary Monday night with a group of ordinary people, all of whom are thirty-two years old, and facing the mundaneness of life with a gnawing need, but trepidation for something new. Bartender Murk (Paul Rush) is desperately in love with regular patron April (Dannae Saranich), who, for the first part of the play appears severely drunk and in and out of consciousness. Murk tries to work up the courage to tell April how much he loves her.

Then there’s Linda (Hope Quattrocki), who is having a crisis with her philandering and slightly narcissistic boyfriend Tony (Coleman Kelly). Linda is very desperate to stay Tony’s girlfriend, while Tony comes into the bar talking about how he has discovered a new dimension, the dimension of unattractive women. He wants to experience a woman for whom he has no sexual attraction.

Finally, rounding out the group is Denise Savage (Maggie Mae Cleary) a virgin, who has decided the time has come to change that, and she chooses Tony as the man to do it.  All three women in the bar know each other from school, though they’re not friends. None of the characters in the play have a firm grasp on what it means to be a friend, lover, or even a decent customer. Poor Murk.
They are, all five of them, stuck in a limbo, and it is on this night, where they just can’t take it anymore. Of course, there is the added element of internalized dialogue being spoken, moments that feel surrealistic, where the world stops for a monologue that doesn’t seem to be happening in the real world, but rather in some ethereal realm. Driven by the need for change, but constantly stopped by the fear of it, these five all find themselves metaphorically trapped by their lives. The set, designed by Courtney Johnson, even includes a couple of wooden cages upstage that slightly resemble jail cells. Characters occasionally find their way to these cages where they reflect on their lives, where desire for freedom peeks out through the wooden slats of the cage.

John Patrick Shanley has written a play where the rules of the world are that the internal lives of the characters will blur into the physical world, and this production plays around with staging and lighting trying to strike the balance between naturalism and landscape, and the result sometimes comes across with too much frenetic energy and sometimes as too nostalgic, creating a tone that is uneven, and sometimes clunky.

Director Dew Elisabeth Stienstra, for most of the show, holds the actors right on the edge of melodrama, and, unfortunately one too many times allows them to cross the line. When this happens, dramatic actions are sacrificed for showy actor bits, and the play then has to take a moment to get back on track. The show is most effective in it’s quieter moments, when characters are contemplating, or confessing something. These are the moments where humanity sneaks in and the actors grab hold, and all of them are given an opportunity to shine when they do.  Particularly Dannae Saranich, who, as April, has a monologue near the end of the play where she discusses her mother and Christmas, and she evokes enough melancholy to strike the perfect balance of forlorn and sentimental. And it’s riveting. Paul Rush is also quite effective as Murk. His quiet desperation for April, and slow movements toward her are the only real trackable events in this play, and through the actor’s earnest sincerity, we want the character to triumph.  Maggie Mae Cleary is quite good as Denise. She excels in the moments where she antagonizes Linda and pursues Tony, mostly because her comic timing is spot on. As Linda, Hope Quattrocki goes for broke. She creates a larger-than-life character, with an energy capable of going over the rest of the cast, and even the audience might feel a little out of breath. Coleman Kelly, as Tony, is just likeable enough to be fun to dislike. He’s smarmy and oddly charming at the same time.  And he’s consistently quite funny.

This production, though maybe a little uneven, is a very solid debut production for the new Sixty-Six Theater Co. It’s funny, thought-provoking, and occasionally poignant. And it showcases a vibrant cast, and interesting theatrical interpretations of a thirty-year old play that felt about as new and relevant as most plays being produced today.