The Koan Unit is presenting a quintet of Samuel Beckett plays at the Odyssey Theatre, now through March 5.

Beckett 5, features the rarely produced short plays Act Without Words II, Come and Go, Catastrophe, and Footfalls, and culminates with Krapp’s Last Tape. And while the evening is an interesting showcase of the late master’s love of the obscurely theatrical, and highlights the existential questions that serve as an engine to most of his plays, it’s also an exercise, not always to it’s benefit, in minimalist theater.

Act Without Words is a very short piece that indeed plays out without words. Two characters, A and B (Played by Alan Abelew and Beth Hogan), are separately woken up by an unseen force (Norbert Weisser), a grim-reaper like figure who hovers just behind them, and they each go about the routine of life before climbing into a large sleeping bag to sleep, so that they can presumably do it all again the next day. They never interact directly, and yet somehow feel reliant on the other. While one character seems to take comfort and even pleasure in the mundane routine of life, the other is miserable, and is desperately seeks the help of a divine force, to take him away from the awful tedium and unavoidable suffering of life.  Ah, Beckett!

Come and Go feels like a sketch comedy scene, but as penned by Beckett never falls into any such convention. Three women (Diana Cignoni, Sheelagh Cullen, and Beth Hogan), old friends, sit on a bench enjoying a nice day together. As each one of them gets up and walks away for a moment, the remaining two proceed to whisper secrets about her. This happens in succession, with great clarity and humor in only 121 words. This was the most enjoyable piece of the night, and all three women seem to be enjoying themselves enough to let us in on that enjoyment with them, while also making an interesting commentary on friendship.

In Catastrophe, a theater director (Beth Hogan) and her assistant are preparing the public exhibition of an injured man. The man is standing on a small block on a stage, dressed in tattered white clothing reminiscent of some kind hospital scrubs, and has a bandage wrapped around his head. The less-than subtle political implications of the piece still resonate because Beckett was aware of our human fascination with prurience, it is why we slow down to see a car accident. It’s also a warning. If we continue to dehumanize, look at things at a macro instead of a micro level, our capacity for empathy becomes smaller and smaller. And while the message still resounds, this piece felt too dated. It feels like a piece that could include a contemporary slant. It’s by no means an outdated idea, and so the ambiguity of time and space make it land less effectively.

Footfalls is a challenging piece. Beckett built the play with a musical structure. A woman, May (Diana Cignoni), in Part one, is pacing outside her mother’s room, as the two carry on a conversation. The pacing, as instructed by Beckett in the stage directions, is meant to be like a metronome, “one length must be measured in exactly nine seconds.” The play then moves to Parts two through four with the same pacing, just in different locations and with different lighting, as we watch May go through this ritualistic daily routine. She slowly devolves into despair, becoming her mother, or like the spectre she tells us about that is “haunting the local church.”  This absence of others in this piece and the absence of hope for May, is really the only constant in this play. As Beckett himself said, “Absence is the only presence.” This particular piece is the most challenging of the evening, and director Ron Sossi keeps the movement less choreographed than it should be, and so May felt more transient by the end, rather than motivated by some kind of ritual or routine. 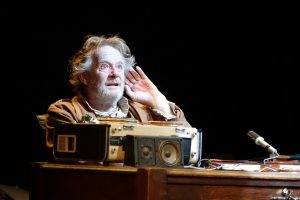 Krapps Last Tape is perhaps one of Beckett’s most personal works. Krapp (Norbert Weisser) is an older man sitting at his desk, listening to a tape recording of himself from thirty years ago. The tape is filled with passion, with a keen sense of urgency about the world and the hope that he was infused with. As he listens, we see in the older man’s face, the regret, and irony as he rediscovers who he was and what was important to him, back when the world had more tomorrows than yesterdays. Norbert Weisser does a capable job of portraying Krapp as a man who is not only discovering but also longing for the man he once was. It is indeed a successful interpretation, of what is one of Beckett’s more accessible works.

The idea of putting together these rarely produced Beckett plays is great for the sole purpose of bringing new audiences to these pieces. The evening feels less significant than it should. Minimalist doesn’t have to mean minor, and Beckett is a major player in the world of dramatic literature, but unfortunately these pieces don’t feel weighted enough to create a unique theatrical experience. As it is, this production serves as an exposure to important dramatic literature and not the exciting theater it should be.