Murder is Anything but a Drag for this Mommie

Looking for captivating nuance? Hungry for intellectual stimulation? You will giddily find neither of these things in Celebration Theatre’s production of Die, Mommie, Die! Playing now through March 26. 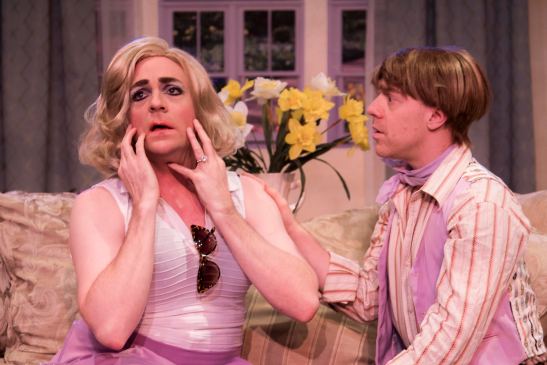 Charles Busch’s play is a pointed send-up of the “Grande Dame” films of the 1940s and 50s, and always features a man in the lead role of fading songstress and star Angela Arden. For this production, that man is Drew Droege, an actor who sinks his teeth in from the get go and never, not once, relents from the pure ecstatic joy at playing the troubled, over-the-top, murderess Angela.

Set in Beverly Hills and following the Sussman clan, Angela and her husband, B-movie producer Sol (Pat Towne) who are as unhappy as you can imagine, what with Angela’s infidelity to famous Hollywood lothario and failed TV actor Tony Parker (Andrew Carter), who is rumored to have a rather “large” talent as a gigolo. Then there’s Sol and Angela’s two children, Edith (Julanne Chidi Hill) who is ever-devoted to her father, with whom she shares a seemingly inappropriate relationship, and despises her mother for her infidelities to her father. And Lance (Tom DeTrinis), who has been kicked out of college for instigating an orgy with the math department. Lance is somewhat coddled and protected by his mother for his “weirdness”—(Which is 40s code for homosexual)—and despised by his father for it. And finally, the completely devoted housekeeper Bootsie (Gina Torrecilla) who is tragically in love with Sol. She is also a closeted alcohol, bible-quoting hillbilly, who serves as a great foil to Angela. 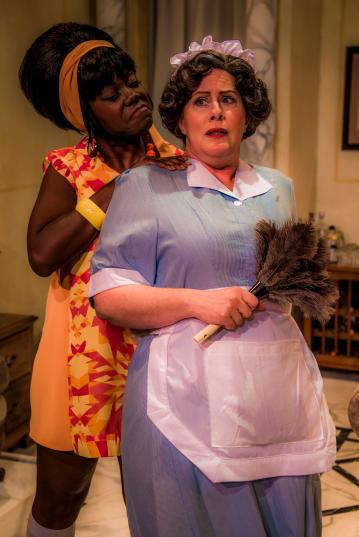 Upon discovering that she has been unfaithful with Tony, Sol cuts Angela off from all of her finances, and holds her prisoner as his wife. He explains that they are a “famous couple” and will continue to appear so in public. This causes Angela to seek revenge on Sol, and comes up with one of the most preposterous ways to poison someone that you can imagine.

The story then turns into the spiral of Angela, in true Greek tragic form, we watch our heroine slowly collapse.

Charles Busch mostly writes hyperbolic, sexually charged pieces that live in some kind of absurdly heightened world. This play is one of his more successful because it plays with issues like gender roles and gay stereotypes, which gives it a little bit of an edge. And so the playing of it could highlight these issues in a very ironic way. Which it accidentally does, because whenever you have a man in drag and an outed gay character in a show, you’re making an inherent point. The point in this case, however, is not asking what the point is, and just enjoying the ride. It’s a silly homage to classic films featuring strong women, stars like Bette Davis, Joan Crawford, and Ethel Merman.

This production is less homage and more straight-up parody. It starts at a ten and surprisingly holds it for two hours. Not even an intermission could break the dizzying energy. There are moments where Mr. Droege hints at these strong female stars of that era, but he is showcasing himself and his deft comic timing without apology the whole time, and his purposeful mispronunciation of certain words is pure gold. He lingers on them like smog over the canyon. 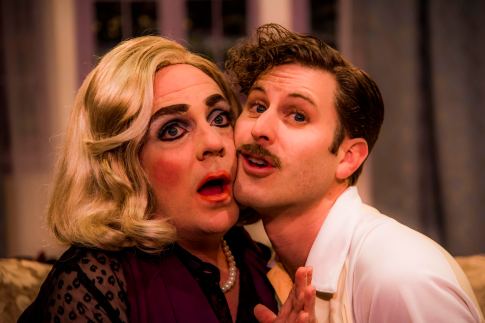 The rest of the cast is also very funny, but is hard-pressed to keep up. Though for the most they do. Especially Tom DeTrinis as Lance, who also heightens his performance from the moment he enters and never backs down. He has hilarious moments and you can see the joy he gets from them. Indeed, the entire ensemble seems to be having a blast, which in turns, allows the audience to have one as well.

This production plays like a midnight cult film. It’s absurd, outlandish, hilarious and completely aimed at a specific audience. It’s a firing on all cylinders drag show, and a parody of Hollywood B movies. What’s not to enjoy?

Director Ryan Bergmann bravely paces the show like a runaway train, and it just never slows down.  Because of this, the audience doesn’t have to do much. There is no thinking involved. Just sit back, relax and be prepared to laugh, because the absurdity and joy that emanates from the stage is completely contagious and it’s one hell of a fun night.

Performances are Thursdays, Fridays and Saturdays at 8pm;

For tickets, please call (323) 957-1884 – or visit www.celebrationtheatre.com to purchase tickets online or to view a complete schedule!