An exploration of self, as told through the eyes of an unexpected narrator, Orange, playing now at South Coast Repertory, is a theatrically infused mix of bildungsroman and Young Adult fiction. Following a sort of hero’s journey, with a less than traditional hero, it sticks to an identifiable catharsis down a theatrically familiar road that we travel briskly as the play confronts the questions of maturation, identity and connection all while sticking to a familiar Aristotelian narrative that blends elements of theatricality and grounded realism into a brief and wistful theatrical experience. 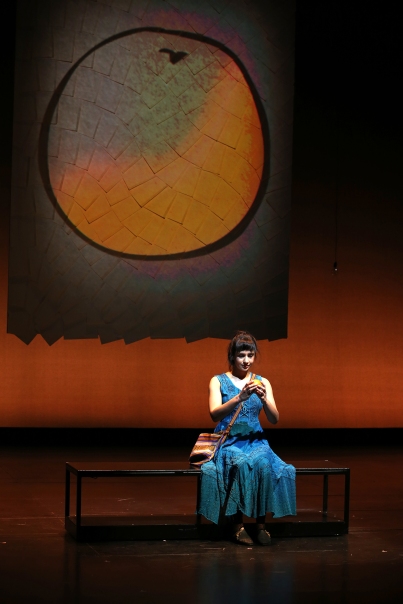 Aditi Brennan Kapil has written a play that deals with the hardships of growing up, of growing up different, and the accidental learning of autonomy that most children have to face. Leela (Pia Shah) is a seventeen-year old girl from Calcutta, visiting Orange County California for the wedding of a relative, she and her cousin (Anjali Bhimani), and her cousin’s boyfriend (Karthik Srinivasan), end up having an all night adventure throughout different parts of Orange County, from a Silo, to the top of a billboard, to the beach the journey proves to be much more metacognitive than topographical.

Leela is a character who is clearly on the Autism spectrum, through exposition we learn that she is home-schooled, and her demeanor and tone of voice imply a developmental issue. She keeps a drawing journal with her that she sketches into, and through the use of projections, straightforwardly but wonderfully designed by Mike Tutaj, we see the simplistic shapes that she sketches and which give us a glimpse at her inner world. The play moves along with us following Leela and her interactions with the world around her, including both of her parents, her cousin, and strangers she meets along the way.  All of the secondary characters are played by the two actors playing the cousin and the boyfriend, and the question as to why is not fully realized or answered in the short duration of the play, and so it can be chalked up to being theatrical.

Director Jessica Kubzansky highlights the texts theatricality by keeping everything to a minimum. There is no set, there are very few props, and most of the world is created through the use of projections on the beautifully designed blank page backdrops. And as Leela, Pia Shah does a commendable job humanizing a character that could easily have gone the way of broad and overplayed. The simplicity that is found through the staging is the most successful element of the play, and by the end, we feel as if we’ve been on more of an internal journey of Leela’s because of it. Which begs the question, why do the same two actors play all the other roles?  It isolates the world, rather than opening it, which may be the intended effect, but it also creates a fantasy element, where we are well aware that the same actor is playing these multiple roles, but we can’t really make the connection as to why. One could make the argument that Leela see’s these people as elements of her relatives, as the people in her life, and doesn’t have enough experience to see them as individuals. 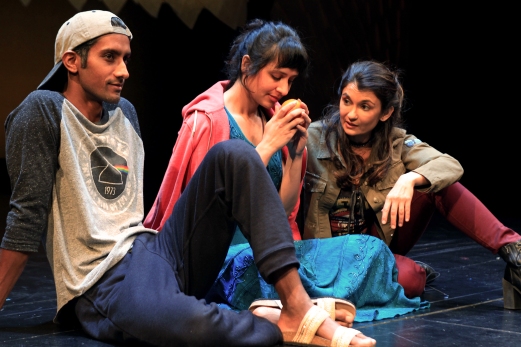 The other element that feels underdeveloped is Leela’s realization, her reversal. What has she learned? It’s clear there is a change, as evidenced by the actress’s profound final moment on stage, but it left a sense of needing more. Dealing with a character that is a nontraditional protagonist means that traditional elements of narrative won’t serve the story, but this particular story is very traditional in it’s structure, so the disconnect of those two things is noticeable.

Finally, there is a cultural statement being made, and the play’s title Orange, may or may not be a part of this. The main question lingering over this play is: does the color signify what it does in Indian culture? There is a great emphasis on the color saffron in India, it is the color of purity and the search for enlightenment. The idea is, in theory, that Leela is very pure of heart, and an innocent bystander as her cousin drags her through Orange County. She is an unwitting protagonist. However, in the process Leela learns about life, love and self sovereignty through their deepening connection, and the connection she makes to others as the night progresses. Ultimately leaving her with more self awareness, or enlightenment than when the night started.

And while these questions linger,  what this play does, is brings an unconventional character into focus, and gently tackles some issues of “otherness,” while still holding true to a traditional coming-of-age story, and, with it’s bittersweet ending,  is perfect for the same audience that makes Young Adult fiction so popular.

South Coast Repertory is located at 655 Town Center Drive in Costa Mesa, at the Bristol Street/Avenue of the Arts exit off the San Diego (405) Freeway in the David Emmes/Martin Benson Theatre Center, part of the Segerstrom Center for the Arts. Parking is available on Park Center Drive, off Anton Boulevard.