Wall Doesn’t Build to anything Revelatory

Agitprop, in its contemporary state, is a highly politicized work of art, a work that is meant to provoke and incite an audience to action of some kind—Brecht is perhaps the most notable agitprop artist of the last hundred years.  Robert Schenkkan’s new play Building The Wall, playing now at the Fountain Theatre, is on the agitprop trajectory, as well as the speculative fiction and naturalism spectrums, it’s a two-hander about the implications of Trump’s presidency as it relates to our immigration issues, which of course infers racist accusations and totalitarian admonitions, resulting, very much in an expository fantasy, or nightmare, complete with stark parallels to the holocaust, and a sense of preposterousness that feels a little obstreperous and didactic. 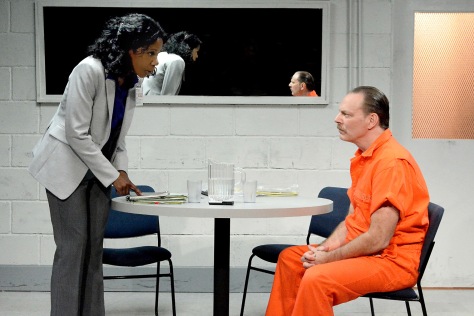 The action of the play is entirely in its exposition, the missing element here is a compelling dramatic through-line for our two characters. It’s not pointed enough as a call to action to be full-on agitprop, and it slips too often into naturalism, and so what we’re left with is a lot of exposition and a lot of easy answers. Gloria (Judith Moreland), is an African-American professor who has come to a prison to interview Rick (Bo Foxworth) about his involvement in the large-scale detainment of undocumented immigrants that has recently occurred. The play is set in 2019, after an attack on Times Square, President Trump (Is it just me, or do those two words look really bad side by side?) declares Martial Law and arrests and detains “illegal immigrants” for deportation.  What happens to the immigrants is what Gloria has come to visit Rick to find out. What she finds out is the horror that is the result of Trump having too much power because of a terrorist attack, and what that means to the rest of us. This is definitely a call to action piece that is suggesting the worst case scenario. The main issue with that is that the speculation is pedestrian. It’s not nuanced, it doesn’t carry any amount of dramatic weight, it simply sits in the turned up nose of the liberal elitism that was part of the reason for Trump’s victory in the first place. 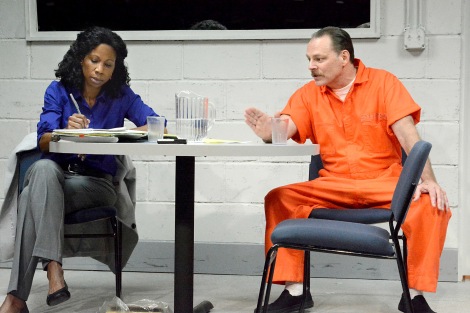 Robert Schenkkan, a Pulitzer Prize winning playwright, has simply taken the collective fear of a group of people and has given them a play that not only repeats their fears back to them, but confirms them in a speculation that, to an outside eye, is simply too far. The given circumstances are such that those of us who are liberal and anti-Trump will walk into this theater already thinking them. It doesn’t challenge anyone. It preaches to the choir, and then makes bold assertions, tries to shock us with a nightmare “what if” scenario, and then refuses to connect these two people. While Rick is a self proclaimed Republican who voted and worked for Trump, Gloria is a liberal democrat, and the fact that we end with these two unable to make any kind of connection, is just proof that the divisiveness in the country is as real as both sides claim. When conservatives cry that liberals aren’t “hearing” them, or vice verse, it’s decidedly true in the world of this play.

What all of this comes down to is an angry liberal writer getting nods from equally angry liberal audience members. It’s a warning that if we let this government go down the road it wants to, that we’ll be perpetrating and perhaps participating in crimes against humanity of Nazi-esque proportions. And while that all may be true, and it certainly isn’t hard to believe it if you are a liberal, or someone with a good amount of common sense, it’s not enough to justify a work of art. And yes, we are in a scary state politically, but that doesn’t mean that we can’t still challenge one another, and create art that not only voices our fears, but joins us together in the pursuit of a greater understanding of each other. This play is far too interested in appealing to a common fear to transcend those barriers, and unfortunately we’re left with a little bit of a sour taste because of it.