The Pride Gets Stuck in The Past

There are moments in Alexi Kaye Campbell’s play The Pride, playing now through July 9, at the Wallis Annenberg Center for the Performing Arts, where the intentions of the playwright seem to peek through the swathes of heavy-handedness, and the clutter of exposition, shedding a little light on the ever changing views toward homosexuality. The trouble though, unfortunately may be that what is shown isn’t so much progress as it is penance. 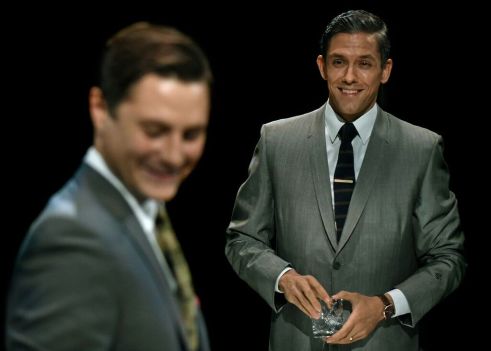 The play, alternating between 1958 and 2008, aims to juxtapose the distinctions between being a gay man in the 1950s and being a gay man in 2008, the issue here is that both time periods fall heavily into the victim narrative, and we are caught up in two stories that are dealing with a gay man who is unable to find happiness because he is either deprived of sex, or addicted to it, thus perpetuating a stereotype and suggesting the evolution of gay men is centered around an unhealthy relationship with sex.  Playwright Campbell has created a story that is meant to show the idea of past and present being interconnected, but the piece struggles to thematically link these two ideas beyond anything more substantial than a gay man’s relationship with sex.

In 1958, Philip (Neal Bledsoe) is married to Sylvia (Jessica Collins) when he meets Oliver (Augustus Prew) with whom he has an affair. The scenes in 1958 mostly deal with the less dramatic moments between these two men, apart from the last scene in Act One which unfortunately felt more gratuitous than earned. There is an implied relationship between them, but that’s all it is. Unfortunately this is also true for the scenes in 2008, the story starts at the end of their relationship, and so we never see two gay men actively in a relationship. In 1958, the scene where Oliver and Philip meet is lengthy, and then we skip their sexual encounters, and are left with their inevitable goodbye scene. So, the middle part, where they get to know each other and fall in love is completely reduced to offstage action. Why?  The given circumstances of two men falling in love in the 1950s is clear, we don’t need to be told that they would struggle. And we have existing narratives like Brokeback Mountain that beautifully capture this. But removing the scenes of intimacy that they would have shared completely negates the humanity of these two characters and reduces them to the perfunctory narrative of victim. Is the playwright suggesting that effect is more important than cause? Because when we get to the moment at the end of Act One that upends the relationship, we haven’t seen enough to suggest that such a scene is even plausible. It’s simply not earned.  And this brings us back to the idea that there is a need for penance by these characters, which is taking the narrative in a very dated direction. 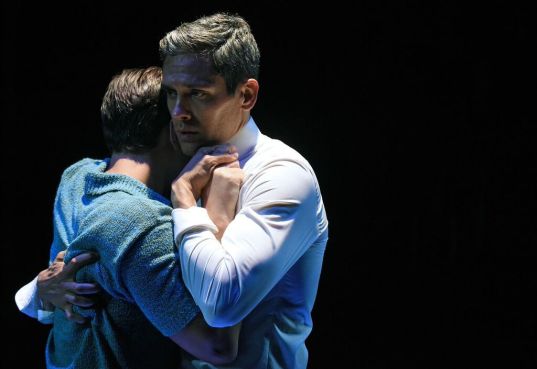 In 2008, Oliver and Philip are boyfriends, and Oliver is addicted to anonymous sex with strangers, which causes Philip to break up with him. Sylvia is Oliver’s wise friend who continuously tries to talk him out of his current promiscuous lifestyle. When we first see Oliver he is engaging in Nazi role playing with a random Man (Matthew Wilkas). I’m not sure if the correlation between the two stories is fully realized, because the only thing they truly share is that that they both center around two gay men who are struggling with being together. And most of the action in the scenes that take place in 2008 don’t move forward, but rather sit in stasis, until Philip and Oliver meet again at a gay Pride event. Whereas the scenes in 1958 move too fast, skipping most of the story. And dealing with Sylvia in 1958 is also a bit confusing. The scene where she seems to be confronting Oliver with a pen of his that she found in her bedroom, is, I suppose,  letting us know that she’s on to what he and Philip have been doing, but I don’t know why. I have no idea what her role is meant to do in those scenes. If it’s suggesting that the past reverberates with our current lives, then there is something missing here. Indeed, there’s something missing throughout the play. Sylvia’s two characters are not mirrored images, nor even opposites of each other. In fact, if you had two actresses playing these roles, it wouldn’t change the narrative at all. The two men on the other hand, at least somewhat, correlate between their past and present selves, making the gimmick of past and present not much more than just that. And the fault does not lie with any of the actors, all of whom are very good. Director Michael Arden also does a nice job of keeping the play in dramatic action mode, despite the fact that there were long moments of narrative stagnation. The set, designed by Arden, is fantastic, as is the lighting by Travis Hagenbuch. So the production has it’s strengths for sure.

The element of this play that is challenging is the text itself. I don’t know what it’s saying. I was left with the impression that the evolution of gay men is one of sexual repression and self-hate that hasn’t evolved, but simply changed shape, it’s just a continuous loop of self-hate, and always revolving around sex. And as one of the characters in the play asked, “What about the non-sexual things?” That is my question, as well. Perhaps because the play was written in 2008, and progress has been moving at lighting speed ever since, it feels dated already, I don’t know. But I do know that the narrative of victimization and promiscuity are not revelatory, nor are they progressive enough to challenge anyone’s views or raise important questions about a community that is much more nuanced than most pieces of literature would allow you to believe.  There is such a need for empowering narratives, and ones that can show the struggle and let us see the other side of it at the same time. Where we don’t get stuck in the mire of our limitations.  Show us the people inside the stories, let us see the vulnerability, not just the oppression, not just the violence.  If we are to learn from the pain of our past, then we must have hope for the joy of our future, or what’s the point.