Chaotic King Is A Crowd-Pleaser

A woman in search of her father serves as a metaphor for a writer in search of her story. King of the Yees, a new play by Lauren Yee, playing now at the Kirk Douglas Theatre is part true story, part fantasy and part meta-theatrical experience. 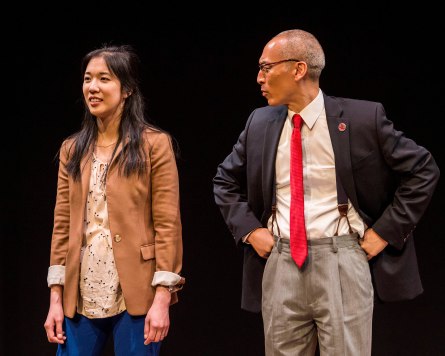 The fusion of style and genre play into the theme of discovery, in which Lauren Yee (Played by Stephanie Soohyun Park) is a playwright trying to figure out what her play is really about. Yes, the play that we’re watching. After her father Larry (Francis Jue) goes missing, Lauren embarks on an adventure through Chinatown in order to find him. Playing with cultural stereotypes and assimilation, Ms. Yee’s journey is a much about identity as it is discovery.

Director Joshua Kahan Brody does a commendable job juggling all of the styles that are thrown into this piece, and keeps it moving, despite it’s over-lengthy running time. The play is really three plays, it starts as a meta play-within-a-play that quickly shifts to a family drama about a father and daughter trying to connect. Larry Yee is a very proud Chinese-American, but his daughter Lauren feels disconnected from her heritage. And in fact, she is highly judgmental about Chinatown, and it’s seedy practices and tourist trap appeal. So the first Act of this play is really two plays. One that deals with Lauren trying to get her play about her father on track, and the second is the personal story between Lauren and her father. The disjointed narrative then veers off into a journey play, where Lauren must venture into Chinatown to look for her father, who at the end of Act One disappears because of a local political scandal.

The mess of style is not necessarily a problem, until Act Two hones in and focuses the play, and for most of the duration of the Act we stay with Lauren as she tries to find her father. She encounters many different characters in Chinatown, all of them played by a talented trio of actors, Rammel Chan, Angela Lin, and Daniel Smith all of whom create wonderful archetypal and even stereotypical characters that serve to bring Lauren closer to her roots and closer and closer to the man her father is. The fantasy elements in Act Two are much more effective when they stay focused on Lauren. The sequence with all the dancing, for example, while entertaining, feels like filler and not at all necessary to this narrative.

As documentary theater begins to surge, this play falls slightly into that category, but mostly it’s a creative nonfictional account of a woman’s quest to find her play. Yes, it’s a symbolic journey that uses a father daughter relationship as a catalyst for the creative process. And since most writers will be aware that the creative process is a messy one, the jumble of style and narrative may seem apropos to the process itself. However, there is an argument that this piece doesn’t utilize enough clever storytelling devices to rely on one solid narrative, but instead veers off onto roads that lead nowhere. The story of the two actors who are waiting for rehearsal to start up again, for example, are two characters who just get forgotten. We have no conclusion for them, because they’re not relevant to the story that’s actually happening. So, while entertaining, they are surplus in a story filled with excess.

Ms. Park and Mr. Jue as Lauren and Larry are both fantastic. We invest in both of them immediately, and that makes the jumbled journey worthwhile, and perhaps even a little more enjoyable than is earned. The rest of the cast is equally great, and they infuse the piece with joy and energy that keeps it from ever falling flat.

In the end, this is a very entertaining, chaotically flawed play. Anytime a writer wants to tackle the creative process, it seems the goal should be to have a strong focus, and only allow the audience to believe the chaos is reigning. This play goes the other way, it allows the chaos to take over and we’re left with a couple of plays thrown into one, and that leaves us with a catharsis less earned. Which means the impact of the piece is not at all what it could be. But it definitely entertains!

King of the Yees

online at http://www.CenterTheatreGroup.org, at the Center Theatre Group Box Office at the Ahmanson