This Rhinoceros Shows its Age

Rhinoceros, the classic absurdist play by Eugene Ionesco, playing now at the Pacific Resident Theatre, is a milestone in post war avant-garde theater, wherein we watch a group of inhabitants in a small provincial French town all slowly turn into Rhinoceros’s. Save one, the protagonist of the play, Bèrenger (Keith Stevenson), fights for his human autonomy and becomes the last remaining human amidst a town overrun.

Ionesco wrote the play in 1959, and it’s accepted by most scholars to be in direct response to the European fall to Fascism and Nazism during World War Two. The overwhelming need to follow societal norms, or the “herd mentality,” is seen through Ionesco’s derisory depiction of the “common man.”  The pressures and power of conformity and assimilation are all told through a bleak, albeit jocular allegorical lens. You know how he does!

Split into three Acts, Rhinoceros starts in a village square where Bèrenger and his friend Jean (Alex Fernandez) meet at a café to discuss an urgent matter. When Jean sees that Bèrenger is drunk, he berates him. The urgent matter that they are to discuss never happens because a Rhinoceros appears and runs through the village, upsetting all the inhabitants. And when a second Rhinoceros rampages through and crushes a woman’s cat, the village is determined to do something about these animals. They will not stand for having their village overrun.

Act Two deals with the inundation of even more Rhinos and ends with a scene between Bèrenger and Jean, wherein Jean slowly transforms into a Rhinoceros in front of us. The play then deals with Bèrenger’s slow decent into the madness of losing all of his friends and colleagues and perhaps even Daisy (Carole Weyers), the woman that he loves most to the mindless life of a Rhinoceros. Thus making the statement that in the absence of their own power, people will conform. When the Rhinos prove unstoppable, each member of the town slowly surrenders to their resistance and joins them. 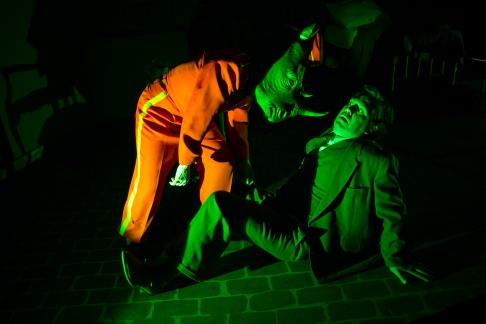 As a piece of writing, the play holds up, it definitely stands the test of time. The thematic developments of the text are rich enough to sustain the metaphor in any time period. It’s interesting that this piece doesn’t feel more of a statement about the current political world of crazy Tweets and indolent leaders that we face daily. The idea of a people conforming to a mass idea or political movement is universal and immutable. But this production strangely feels dated. Where this production falls short is in the execution of the material. This production, under the direction of Guillermo Cienfuegos, plays most of the piece as naturalism. The tactics are played straightforwardly, and we accept the world of the play as being a place where people are turning into Rhinos.  There are moments of heightened reality, but too often it’s grounded in verisimilitude. The dialogue drives the production. The underlying dramatic action, which is filled with symbolism and metaphor, is stripped down, and actors play the dialogue rather than heightening the world into the absurdist realm in which it belongs. That is until we have actors appear in Rhinoceros heads, that look like Halloween masks, which gives the play a horror movie tone that serves neither the material nor this production.

The sets, designed by David Mauer, add a clumsiness to the piece. By having sets appear to look like “real” places is also a disservice to this piece. It plays into the notion that we’re watching a plot-based narrative, and we’re not. This is the tricky part of doing a play like this. Where does the world of the play reside? Does it look like life? Or does it deserve a hyper-theatricalized experience, where the world of the play and the theater work together to earn the symbolism that is coursing through the play from beginning to end. The chaos in Act One, is never fully reached. The humor is cut short by scenes that play like His Girl Friday style office comedies, where the heart of the piece gets lost in the presentation.

The play is quite funny, and should be heightened enough to allow the humor to permeate, but here, that doesn’t happen past Act Two. By midway through Act Three the remaining actors are reduced to one tactic, and are forced to play more of the same for the last hour. And this is a three-hour production. The final act isn’t earned simply because the payoff cannot be earned in a piece that is meant to be a heightened, absurdist metaphor when we’ve been watching it played as emotional realism. The tone is uneven, the humor and absurdity of the situation devolves the final moments of the play into what feels like a scene from a B-horror movie, wherein a monster is lurking just outside the door, and our hero is forced to continue his resistance against all odds. It doesn’t work for Ionesco. It becomes something else, and we lose the meat of the play through window dressing.  And while all of the actors do their very best, some of whom have great moments, it’s just too uneven, and because its played in a dated fashion, it shows its age, and can’t resonate as it absolutely should.

Where:
Pacific Resident Theatre
703 Venice Blvd.
Venice, CA 90291
(Parking is free in the lot behind the theater and on the street)