The new musical The View UpStairs, is making its West Coast premiere at Celebration Theatre. The musical which features book, music and lyrics by Max Vernon is a sort of nostalgic, slightly politicized and gaycentric piece that raises comparisons of violence toward the modern LGBTQ community and the early 1970s, where community was a much different word and idea. 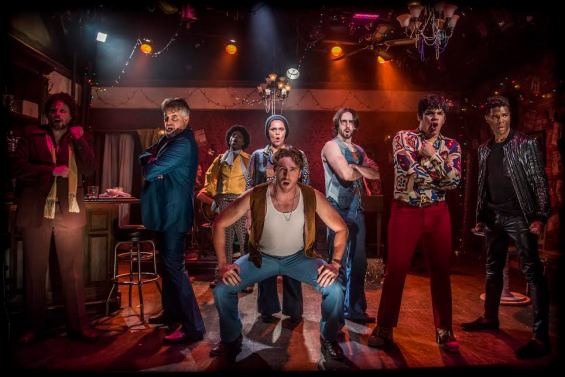 Set in New Orleans, in two time periods, in an abandoned building formerly a bar called The Upstairs Lounge, Wes (Matthew Hancock), in 2017, has purchased the building, and because of the side effects of cocaine, time travels back to 1973 to experience what life was like for the gay community in the early 70s.

Not much of what we see is novel. There’s the usual effeminate gay men, one of whom is the fabulous Willie (Pip Lilly). Then there’s the closeted, but still obviously gay piano player, Buddy (Jake Anthony), A Latino drag queen named Freddy (Rehyan Rivera) A sexy hustler named Patrick (Darren Bluestone) and Dale (Joey Ruggiero) a homeless gay man who feels rejected by his own community. All of this is overseen by bartender Henri (Benai Boyd).

So in come’s time-traveling Wes, a wannabe fashion designer, who is actually a spoiled millennial so caught up in his own lifetime, he has no knowledge of what gay life was like before he was a thing, which serves as the impetus for the play. He bears witness to police brutality, to struggles he can’t imagine. He helps young Freddy in his drag pursuits, and falls in love with hustler Patrick. All the while being schooled by patrons on the struggle, which he doesn’t quite see as his own. At least not until he does. So the story is quite simple, and follows a general trajectory toward its inevitable conclusion, where lessons of oneself need to be learned.

But herein lies the dramaturgical quandary. Who controls the world? How does history affect the present in and of itself, particularly when the present day is riddled with political unrest? Meaning cannot be extracted from a period of time without the power of hindsight. Therefore, to say out loud the parallels from past to present robs the audience of the experience of discovery. Discovery lies in the notion that where we came from and where we are, are not as far apart as we hoped. 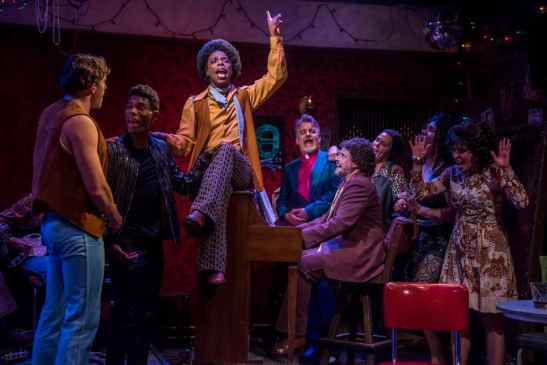 And while the play has fun with stereotypes and nostalgic notions of groovy clothing and colloquialisms, it wants to be weighted with authority. But to whom do we look for this authority? Right is right and wrong is wrong. Can the engine of a piece rely entirely on a truism? Wes needs to learn this particular story in order to what? It’s unclear. Why would he be transported, especially through drug use, to this enlightenment? Nothing that happens in the past is revelatory, because we know it. What we don’t know is Wes in current day. And so if one informs the other, the connective tissue is missing. How does he learn? Why does he learn? Is it magic? Is is false? Does it matter?

It’s not enough. There is something here that begs the question: why? And so not to fault the production, but easy answers should not satisfy. Hetero-normalizing (If that’s a word) takes over and the traditional love story narrative, or the just be yourself message starts to permeate the landscape and the appropriation of cultural identity conforms to traditional tropes. Don’t just tell us what we already know. And please, someone explain to me why Dale can’t have a better arc. If he is who I think he is in the story,  without giving anything away, then it’s kind of unacceptable to allow him to exist in this form. Aren’t we past that? Politicizing of cultural identity in 2017 is popular. We are being forced into it by a hostile government that is bringing the crazy out of the woodwork. Therefore, the responsibility of the artist is greater than it used to be. Digging deeper into the psychological aspects of culture and individuals in that culture, through closer examination of self is required. We can look into the framework, the building blocks of a community that is still struggling with, not only society, but itself, as evidenced by Wes’s narcissism and drug use, which are not two things that we should exclude from the appropriation box here, and we can use this as a catalyst to understanding that the LGBTQ community has made strides, but is still on the road to acceptance.

So this play is on the right track. Though I don’t understand all of the musical numbers. Some of them don’t progress the story at all. It sits and waits for them to be over and then the story continues. The duration of a few of them also had a soporific effect. And the choreography by Cate Caplin mostly demanded a bigger space. There is excess here. But there’s also hints of something significant. And Director Michael A. Shepperd knows how to showcase his performers. Specifically Pip Lilly, who, as Willie, is fucking fierce. But in the end, it’s lighter and just a bit frothier than I think it wants to be, than Wes’s final monologue tries to be. And if we are to hold as ’twere the mirror up to nature, we can’t ignore the fact that we didn’t make the mirror,  so we might be holding the wrong one. We’re reflecting someone else’s idea of us. And it’s time to reflect “us”, all the “us’s” who have to not only retell the past as it was, but inform the next generation what it can be. And while this play wants to do that, it falls into too many traditional traps. But at least it’s an entertaining attempt.

Directed by Michael A. Shepperd

(Including a cocktail reception following the performance); $75 Reserved, $100 House Seats;

*I wanted it to rhyme!