Phylicia Rashad Is Something of a Miracle in Head of Passes

Faith, that ubiquitous and imperfect belief, wherein trust and confidence take the place of facts or proof, is placed into extreme focus in Tarell Alvin McCraney’s new play Head of Passes, playing now at the Mark Taper Forum.

The notion of faith as a driving force is a common enough theme, it permeates our culture through the principles of religion, it’s something we hold onto in our relationships, and there is a social-contractarian ideal that suggests we have a kind of faith in one another in order for society to function at all. With such a lofty theme, Mr. McCraney creates a parable that is at once eloquent, harrowing and surprisingly funny.

Family and friends are gathering to celebrate the birthday of Shelah (Phylica Rashad), at her house near the Head of Passes, at the mouth of the Mississippi River. With unrelenting rains outside, and a roof that springs massive leaks, the party devolves into a series of squabbles and family drama that ends the night with Shelah alone praying for the burden of her life to be relieved. The turn of events that lead us into Act Two, and then continue to be revealed, are as severe and terrifying as any biblical passage,  and Shelah’s faith is put to the ultimate test.

Director Tina Landau masterfully handles the shifting style and tone of the show. It flows effortlessly from one thing to the next, and she gets every ounce of verisimilitude and poetry from the text,  and humor and depth from her tremendous cast. Anyone familiar with most of Tarell McCraney’s work may be surprised by the accessibility of this play. Just entering the space and seeing Shelah’s home, stunningly designed by G.W. Mercier, might not be what you expect. This is naturalism—a space that doesn’t always suit the heightened poetic nature of his previous work, specifically, the wonderfully poetic and highly theatrical Brother/Sister plays. But this play, as allegory, needs to reflect life as closely as possible, so the destruction we witness hits close to home and Mr. McCraney delivers. 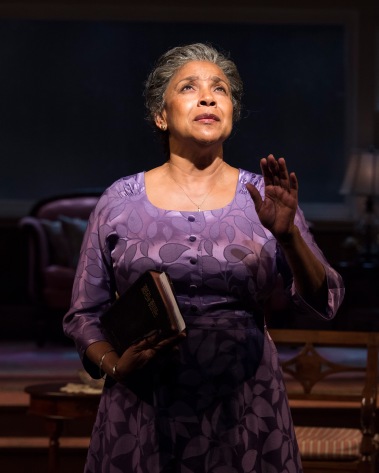 The text itself is filled with beautiful prose, eloquent passages that can sometimes carry the weight of a sermon. But it’s also, at least for the first half, quite funny. There is a playfulness to the opening of the play that allows for the turn to land with more impact than it might have otherwise been able to do. So often playwrights make shifts in tone, mood, and sometimes entire genres without fully earning it. As if the play demanded a style, and the writer fights with it, until the play gets what it wants. This play earns all of it. The severity of the circumstances would drown in tired symbolism should the playwright have chosen a heavy-handed approach. Instead, he eases us into the world with laughter, and relatable family drama. And so the pathos of Act Two packs a gut punch that will leave an indelible impression. This is not to suggest that this is a perfect play. While it’s exhilarating in it’s language, and pushes theatricality to melodramatic heights, it’s also somewhat messy at the start, and seems to take it’s time to settle in to what it needs to be.  Act One finds itself in August Wilson-style territory, and moves a bit chaotically. It might have benefitted from the razor-sharp precision that Act Two discovers immediately.  But overall this is a hugely successful production.

The success of this production does not stand with Mr. McCraney and Ms. Landau alone, the cast is superb. All the way around, absolutely pitch-perfect. But the bulk of the play is carried by an astonishing performance from Phylicia Rashad. This is a tour de force of such gravitas, it is the stuff of legend. The weight she brings to Shelah, the way she carries herself, the sorrow she exudes, the desperation for hope, every ounce of faith she questions with a severity that registers as clear as day from row one all the way to the rafters is perfection. Man, she fills that theater with something magical. It is not every actor who can do what she does in Act Two of this play, without a flaw.  Without letting us see any of the technique that goes into it. This is a magic act that leaves you wanting to know how she did it.  Much like when a world-class singer hits every note perfectly, or you watch an athlete break a world record with seemingly no effort, so goes Ms. Rashad’s breathtaking performance—it is something that should not be missed, and something those of us privileged to see will never forget.

Tickets to “Head of Passes” are available by calling (213) 628-2772, online at CenterTheatreGroup.org or at the Center Theatre Group Box Office located at the Ahmanson Theatre. Tickets range from $25 – $95 (ticket prices are subject to change).