In desperate need of human connection, a group of people navigate love, loss and addiction in the surprisingly dated and sluggish Water By The Spoonful, playing now at the Mark Taper Forum. 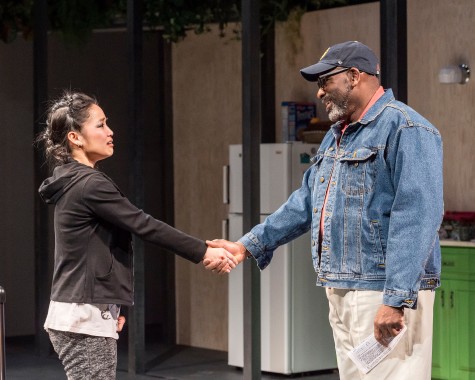 Written by Quiara Alegría Hudes, as the second part of a trilogy that deals with a soldier’s return from the Iraq war-the other two parts are playing in Los Angeles right now-this story focuses on several characters who are all desperately trying to connect with someone. For Odessa (Luna Lauren Vélez), a recovering crack-addict who runs an online forum for people in recovery, she is holding on to her own sobriety fiercely with both hands. In her online forum are a girl from Japan with the screen name Orangutan (Sylvia Kwan) who has formed a digital friendship with an older IRS worker known as Chutes & Ladders (Bernard K. Addison), and then there’s newcomer Fountainhead (Josh Braaten), a very privileged white guy who is deeply struggling with keeping more than one day of sobriety. The four of them navigate the treacherous waters of staying clean and sober with each other while dealing with other difficulties in their own lives. The scenes where these characters interact, which is in a chatroom, are staged dispassionately. Characters with too much space between them talk straight out to the audience in raised voices which creates an overly accentuated sense of isolation, and is awkward.  The thread that holds these moments together dramaturgically is severed from the first moment we realize that actual connection is not happening here. Whereas the safety of online anonymity should lend itself to a relaxed and intimate nature that these scenes could have used to create an exciting theatrical experience, they are, instead, analytical and distant.

Then there’s Elliot (Sean Carvajal) dealing with the death of the aunt who raised him. He and his cousin Yazmin (Keren Lugo) try to figure out how to put together a funeral and deal with a problematic relative. These two stories, on paper, overlap and like merging bodies of water join together to create a carefully constructed and cathartic anagnorisis. This production uses near-blackouts that slow the pace to an almost-stop, and the jazz music that accompanies the scene changes was unnecessary, dragging the already difficult tone down to the level of maudlin. And so what worked on paper is lost in translation. 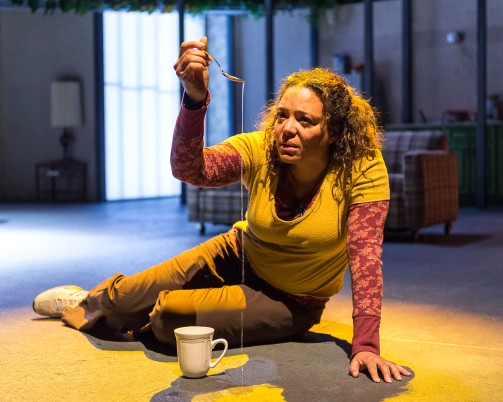 Winner of the Pulitzer Prize in 2012, the play already feels out of touch with the current political and technological climate. And so it doesn’t need any help distancing us. It utilizes enough technical elements to remind us that the speed of progress is dizzying. And yet, this only serves as a distraction to the story, because the production refuses to understand the theatricality inherently infused in the writing. As written, the play straddles a line of sentimentality and hyperbolic idealism to a degree that in the wrong hands an audience can feel somewhat walloped over the head with messaging. And this is the case. The beauty of the prose drowns in muddled direction. The actors are all capable and occasionally have moments to shine through. Bernard K. Addison, for example, as Chutes & Ladders gives the most vivid performance of the evening. He somehow doesn’t fall prey to the stagnation that keeps some of his scenes at an absolute standstill.

Director Lileana Blain-Cruz makes some strange choices here. There are too many moments where nothing is happening. Way too many blackouts, and scenes, rather than flowing into one another are punctuated with lighting cues that feel more akin to community theater than Center Theatre Group. There’s pacing issues for sure, and very little in the way of theatricality that transcends beyond the very obvious. And unfortunately for this talented cast, the performances suffer from a stilted kind of force that pulls the audience immediately out of the action and averts our eyes to our watches far too often. It’s a shame because this script really does deserve better attention.

Water By The Spoonful

Intermission: “Water by the Spoonful” is performed with an intermission.

Center Theatre Group/Mark Taper Forum At the The Music Center