This Long Day is Worth the Journey

Eugene O’Neill’s semi-autobiographical play Long Day’s Journey into Night is a lumbering, loquacious and lyrical voyage into the dysfunction of family. 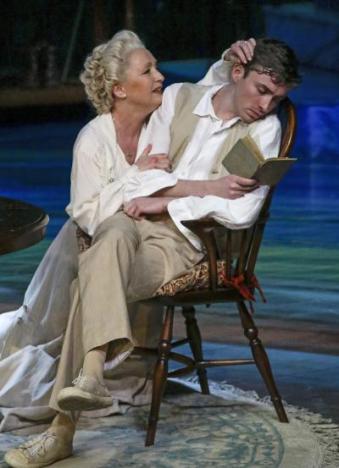 And while the title is not at all hyperbolic, this production’s swift pace makes for a thrilling, if uneven, slightly bi-polar production. Anyone unfamiliar with the story, here’s what you need to know:

It’s August 1912, in the summer home of the Tyrone family. The play takes place, as the title suggests, over the course of one day. Mary Tyrone (Lesley Manville) has recently returned to her family after a stay in a sanitarium for morphine addiction. Her family tiptoes around her as she makes sudden and frequent exits up the stairs to her bedroom. Is she using again? Then there’s the youngest son Edmund (Matthew Beard), who has developed a pretty bad cough that Mary keeps insisting is a summer cold, which it clearly is not. The very notion that the youngest in the family, the one who best represents the future, is perhaps dying of consumption. So the family tiptoes around this subject as well. Being careful not to say anything about this in front of Mary or even to Edmund, so as not to upset either of them. Older son Jamie (Rory Keenan) and patriarch James (Jeremy Irons) serve as foils to Edmond and Mary, and as buffers between the past and present. They bide their time until their own regret-filled demons start slowly pouring out. The slow moving day sees the fog rolling in on the Tyrone family as secret resentments unearth themselves, and the darkness of the coastal night air unleashes all the ghosts of their unfulfilled lives. This is all highlighted quite nicely by Peter Mumford’s moody lighting design. Though some moments got too dark and we lose the actor’s face a bit too much, it mostly serves the material well.

Thematic development is the name of this game, and O’Neill, morbid Irish pessimist that he was, takes his time as, card by card, he builds a house of volatility with such a capricious hand that slightest provocations threaten to topple it all. The very expansive set, designed by Rob Howell brings an interesting perspective to the piece, in the way it feels so small in the center, where the table is, and seems to widen as it goes all the way up to the rafters. James’ library has a weird shape to it, upon first glance, it almost has a German Expressionistic feel. As if it’s representing his intellect-as he sees it. Which makes Edmund’s tiny bookcase on the other side, all the more pointedly small. 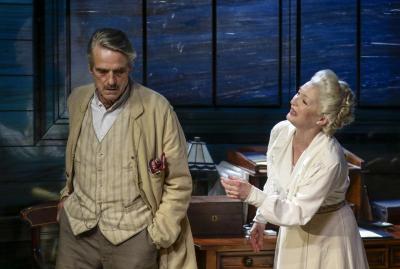 This would imply that we are inside the mind of James Tyrone, a self-centered and quite stingy, if not bombastic man. Who readily touts his love of Shakespeare and intellectual pursuits. And as interesting a dramaturgical aspect as it would be to suggest that the play is seen from inside the mind of James, the play feels deeply detached from any one character and gives a fly on the wall perspective for the audience. We are a kind of despondent voyeur peeking in on the devastation of a family. The melancholy, Irish brooding sorrow hangs in the air like the fog just outside. And so the focusing in on the playing space in the middle, draws the eye into this deeply focused moment and gives it a sort of weight.

Through the use of repetition, where scenes seem to be repeating the same arguments over and over again, we realize we are indeed in the midst of a cycle of mundane everydayness that is about to become unhinged. Director Richard Eyre understands this completely and allows for each of these scenes in each of these acts to have their build, climactic moment and resolution. The pacing, however, a few times seems too manic. Particularly when Mary is rambling. And while Lesley Manville is pretty stunning in the role, there are moments that feel forced. However, this is not to downplay the exquisiteness of what she does here. She elicits such vulnerability and such profound internal struggle, and most of the time it pays off perfectly. The rest of the cast is incredibly good. Jeremy Irons, I mean come on! He is vocally brilliant, psychologically fascinating and he makes James’ adherence to holding on to the way things were, his desperation beautifully, subtly realized. All four of these actors f*cking get nuance! 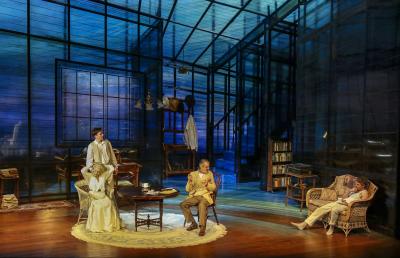 The slow, slow, burn of this play lies in its romanticizing of the past. Each character is stuck in the glory of what was. And O’Neill’s verisimilitude in conversation juxtaposed with beautifully poetic monologuing demonstrates the power of regret and golden age thinking, where one can’t enjoy the present because of what she thinks she’s lost. This is all the more tragic for the Tyrones, because all four of them are trapped in the past, and the final analysis suggests that there is no hope for the future.

This production, which started at The Old Vic in London and then moved to New York,  is at once a whirlwind and a bit of a marathon. It feels heady, bloated in places and often too austere. And even though it proves that a text as polished and thematically developed as this masterpiece certainly is can be as relevant today as ever, in the world of theater, it makes one wonder what new work can have this size? This slow burn? Are we doomed like the Tyrones to stay reminiscent and romanticize the past? Or will we unearth the next Eugene O’Neill, whoever he or she may be, by investing in theatrical works that dig deeper, that go farther and play to an audience that isn’t just interested in pretending there’s a fourth wall anymore. What does that work look like? But for now, it’s a slice of American Literary history, and it’s awfully terrific.