It was 411 BCE, comedic playwright Aristophanes presented to the people of Athens his new comedy Lysistrata, a radical and uproarious account of one woman’s extraordinary mission to end the Peloponnesian war by getting all women to refuse to have sex with their husbands until they all agree to stop fighting. 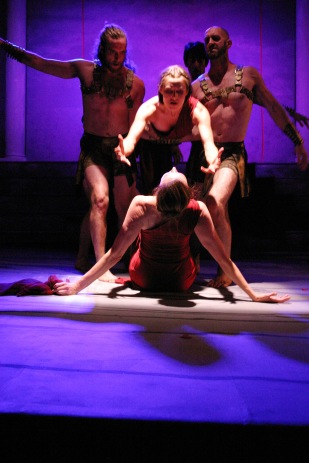 Lysistrata, who has just lost her son in the war, and proves to be a persuasive orator, convinces the women of Athens to follow her in this mission, which ignites a battle of the sexes that is at once enlightening and hilarious. Now, in 2018 Los Angeles, playwright Eduardo Machado along with Not Man Apart artistic director John Farmanesh-Bocca, who serves as director and choreographer, have created Lysistrata Unbound, playing now at the Odyssey Theatre, a modern adaptation that straight up removes the comedy from the original text, adds a physical theatre component and does all it can to really make sure the audience really understands the negative aspects of war, sexism, toxic masculinity and female empowerment.

In this version, Lysistrata’s fate is much worse than it is in the original text. But follows most of the same trajectory. The inciting incident remains the same, and we watch Lysistrata (Brenda Strong) mourn the loss of her son for many weeks, until General Adeimantus (Vito D’Ambrosio) demands that she bury his decaying body. Though the inclusion of many male roles, rather than having the Chorus speak is new.

Moved by the awful tragedies of war, Lysistrata becomes a woman obsessed with seeing it’s end. There are still two choruses, though not in the traditional Greek sense. In the original text there is a Chorus of Old Men and a Chorus of Old Women, citadels of a generation meant to keep the younger ones in line. The Chorus of Old Men would often wax misogyny, in hyperbolic song, that served as a kind of scathing commentary on contemporary views of women. Which would still ring true today. In this version, the Chorus has transformed into very fit and attractive young men and women who, instead of speak are physicalized in choreographed movements, which actually serves as the most interesting change from the original text. Director/choreographer John Farmanesh-Bocca plays with archetypes of masculine and feminine in not only movement but in sound as well. The women use breath as a means of grounding and unity, where the men have a series of grunts. Not subtle, but pointedly effective. 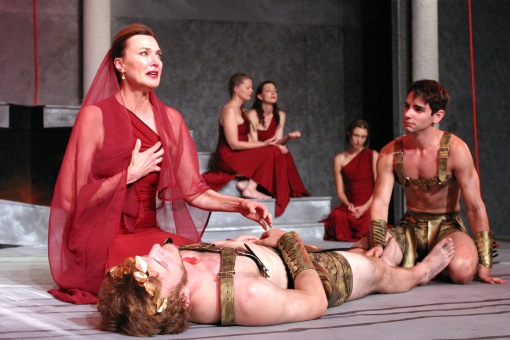 Then there are added characters and subplots. Some of which serve the story just fine, and others that distract from the dramaturgical through-line. One subplot deals with a young soldier Hagnon (Jason Caceres) and the lustful older General Adeimantus, a homoerotic subplot that manifests in a physical moment that feels a little like rape. And while the #metoo movement is ubiquitous in pop culture at the moment, the moment is mostly effective through the two actors at the center of it. It gives voice to an issue that probably doesn’t have anything to do with the actual play, but D’Ambrosio’s lascivious general juxtaposed with Caceres’ wide-eyed innocence shows the corrupting force of toxic masculinity better than any of the moments between the other characters.

The heavy handedness of the updated text, unfortunately, serves an anchor to Lysistrata herself. Brenda Strong’s performance is finely controlled and her imposing presence matches well with her resonate vocal qualities, but there is a missing element here. A hugely, noticeably missing element. The Comedy.  And while no truly great comedy allows characters to think their situation is funny, the heightened nature of satire allows for political messages to be exactly what this piece wants them to be- in your face and obvious. So why make it so severely tragic?

When you strip away the comedy, but leave the thematic structure in place, you are left with one of two things, agit-prop, or heavy-handed drama. The latter being a morose, and often insulting hammering over the head of a political message that is actually, more often than not, just preaching to the choir. So the audience stays one step ahead of the play and we cling to the moments that feel authentic, like the physical interludes, and not as manipulative code-switching meant to placate to an ideal that most people already accept as true. War is bad- check. Sexism is bad- check. Toxic masculinity needs to be a thing of the past- yeah, you get it, right? What the playwright has done here is suggest that in order for something to be taken seriously as a message, it can’t be funny. That we, the audience, must take the subject as seriously as the characters in order to have true catharsis, and that’s one hundred percent false. And because of this, the result is a much less powerful experience. Because, as is the case for this production, it’s too severe, it’s too overwrought, there’s very little room for subtext even. Because the starting point is a play that had an anti-war, anti-sexism message, but it was cloaked in heightened silliness, a fact which actually angered Athenian audiences when it premiered. They thought they were getting a crazy comedy, and what they walked away with was a politicized message. That’s the point! That’s when theater is most effective, in its unexpected blending of ideas and genres. And one of the ideas here that stays intact, is it recognizes the power of women. The ability women have to change the world, and how men have often stood in their way.

One of Lysistrata’s final speeches, as written by Aristophanes, is a beautiful testament to the power of femininity, when she suggests to the men who are fighting in the war, the Greeks and The Spartans, to reach out their hands in solidarity to each other, “but,” she explains, “don’t grab too hard or be too rough, not like our men who act so boorishly—instead do it as women do.”  She understood, and tries to impart that compassion, generosity and empathy are mostly female attributes, but need to be more embraced by men. Men who are aggressive, prone to violence and apathy. She also blames society, and believes that men are made to be this way, because they are taught to ignore the softer parts of their nature, quite literally, in the original play men keep showing up with erections, a device that personified the aggression and frustration of the male sex drive. It’s almost impossible to contextualize what life in 411 BCE was like, almost as impossible as it is to believe that nearly 2500 years later, that message resonates the same. And while this production doesn’t hold up the true intention of Aristophanes’ comedy, it does make the same argument. The argument that we are nowadays all too familiar with, but one that needs to finally be heard…Time is indeed up.