Nikki Corona Proves Not Only Untranslatable, But Un-Developed and Nearly Un-Watchable.

There doesn’t seem to be a good place to start to discuss the inscrutable and confounding play that is Jose Rivera’s The Untranslatable Secrets of Nikki Corona, playing now at the Geffen playhouse. 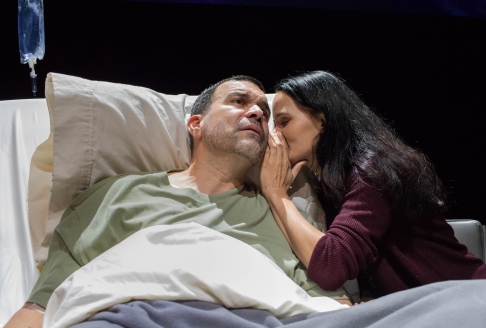 It is difficult to know how to discuss a play that clearly belongs in a workshop and not on the Geffen, or any other, stage. I went into the show with no context for what I was about to experience, and within ten minutes I found myself bewildered. There was a disjointed, messy feel right from the start and it only got worse. Not to criticize for its own sake, but as someone who seeks to critically analyze dramatic literature and performance, there has to be a set of criteria that a piece of theatre meets before such analysis can be drawn. This play doesn’t meet it.

It is perhaps my own ignorance as an audience member that I found myself with more and more questions as the play progressed and fewer and fewer reasons to believe that this was a fully fledged drama and not a workshop for something still in its very early stages. Nevertheless, after viewing this production, I read the script to see if there were developments I missed, or clarity that got muddled in the performance. I’m actually more confused after reading it. It’s a big mess of ideas that seems to be desperately attempting poetic resonance, confusing depth with sentiment, but ultimately doesn’t really know what it’s saying.

The play opens with Abril (Onahoua Rodriguez) calling her twin sister Nikki before throwing herself off the Golden Gate Bridge. Next we see Nikki (also played by Rodriguez), who is riddled with guilt for not answering her sister’s final call, at a business called A Better Orpheus (wink wink) a service that connects people in grief with people who are dying and are willing to take messages to loved ones with them into the afterlife.

First off, the premise is solid enough of an idea to be the seed that could potentially flower into something theatrical. Even if,  like the preceding sentence, it’s really on the nose and trite.  Unfortunately, the focus of the story is so slipshod it’s hard to even know whose story it is. It feels like it’s going to be Nikki’s play, not just from the title, but also because she is the main focus of Act One. And while there are challenges that the script sets up immediately, it has some semblance of focus.

It seems to be following a clear trajectory when Nikki meets Orlando (Ricardo Chavira) a man, much younger than she expected, who is dying. The scenes between Nikki and Orlando create an emotional stake between the two that soon gets ditched in favor of the underworld traipsing that Orlando will undertake in Act Two. So, there’s a set up, there are some emotional stakes, there are two characters who seem to have some sort of connection that all gets abandoned and the story changes to a metaphorical journey play that leads us through a Dante-esque underworld giving the impression that most of Act One could probably be scrapped.

Once in the afterlife, Orlando is guided by Lisandra (Cate Scott Campbell) a redneck recluse whose death was due to a tainted peach. She is a thinly drawn attempt at comic relief in a piece riddled with humorless pathos.  And indeed the second act is such a slog it can’t really be justified through any amount of justifiable criticism. It’s best left to the imagination.

The issue here, unfortunately, is almost entirely with the script. It’s as if grandiose symbolism and hammer-hitting metaphor are meant to substitute character development and catharsis. Playing upon sentiment isn’t enough to sustain a story that shifts focus and wants to balance the real with the surreal, as Rivera is usually deft at accomplishing. What we’re left with is a jumbled and under developed piece of hackneyed theatre that more closely resembles community theatre than anything the Geffen should be producing. Even the  set design looks and feels a bit more amateurish than is expected from this theater.

Director Jo Bonney is an accomplished and highly skilled artist. Unfortunately, in this case, she can do nothing to save the script from falling. Likewise, the actors are stuck playing underdeveloped characters that seem to be wandering, lost in a sea of confusion, before ultimately succumbing to the stumbling blocks that the script sets up at every turn. In the end, this production is stagnate, dull and glacial. There is nothing to grab ahold of and there is no redemption for the tedium you will feel by its end. If this is what new play development looks like at the Geffen, let’s hope there’s more published works in the offing soon.

The Untranslatable Secrets of Nikki Corona