Rosencrantz and Guildenstern is Dead on!

Free will and the sheer randomness of the universe as two men wander a theatrical wilderness in desperate search for understanding makes Tom Stoppard’s Rosencrantz and Guildenstern are Dead, playing now at A Noise Within, a thought-provoking modern masterpiece that is as deeply profound as it is hilarious.

Taking place in some ethereal theatrical setting, we open on our titular characters in an unknown time and place flipping coins, which continuously keep landing on heads. Rosencrantz (Kasey Mahaffy) is excited at the unlikeliness of his good fortune, as he wins the coin every time it lands. Guildenstern (Rafael Goldstein), on the other hand, is perplexed by the illogical chances of such a defying of odds. And we are thrown into the first of several philosophical explorations deeply developing a thematic structure that ultimately asks the question: is the world fundamentally random, or do we have say in what happens to us? This sparks a series of events that will continuously confound our two heroes. For these two men, there are no answers, only more and more questions, more and more confusion. They don’t remember where they are, where they’re headed, or how they got there.

When The Player (Wesley Mann) appears with a traveling group of tragedians the play’s first and perhaps most dominant theme is revealed through the exhilarating language that is exchanged between them. Life imitates art. When art is used to propel the recognition of a story holding “as ‘twere the mirror up to nature,” the purpose is to recognize ourselves in the stories enacted for us, thus sparking a catharsis and giving us  some kind of meaning- artificial though it may be. Hamlet himself, in Shakespeare’s play, experiences his recognition, or anagnorisis, with the mousetrap he has set with the play within the play. Hamlet has one of the actors murder the king Gonzago, and then has the murderer marry the dead king’s wife. At which point, Claudius rises, “lighted with false fire?” No. Hamlet’s trap worked. And Claudius’s reaction to seeing his own story play out in front of him proves to Hamlet that Claudius is indeed the murderer of his father.

For our two unwitting characters, as the Player and his tragedians enact their story, there is no clarity, no a-ha moment, only confusion. Abstract art is much different, and we are in a setting where meaning has lost logical explanation. Guildenstern, in fact, argues with the Player about the effectiveness of genuine feelings or events in theatrical performance. His argument is that theatrical performance cannot ever be fully realized or even accepted as truth by anyone watching. 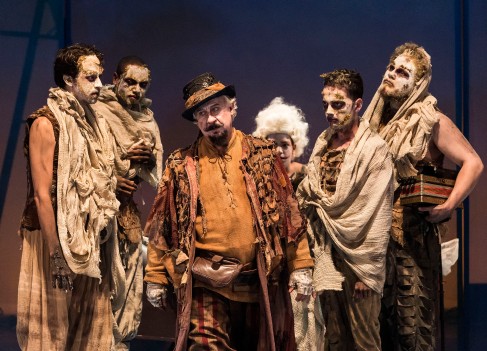 The Player responds that theatrical death is the only death an audience will believe in because it’s what they expect. This raises the next important theme, the illusion versus reality device. Stoppard ingeniously employs dramatic irony by refusing to theatrically portray the expected outcome of this play, thus defying our expectations and fueling the aforementioned theme about the randomness of the world.

In-between these scenes of existential quandary, we see episodic scenes from Hamlet. The moments of interaction between Rosencrantz, Guildenstern and Hamlet (Paul David Story) as well as Gertrude (Abby Craden) and Claudius (Jonathon Bray), actually fill in fewer blanks than they do add more questions. However, these interactions are vitally important to us, the audience, as we understand that as the play progresses our two protagonists are being pushed closer and closer to their imminent deaths. So each moment that occurs seems to be working as a force greater than them, some random force is causing them to fall into a passive role in their own fate, and they are powerless over their own destinies. This lack of agency is manifest in their placement into scenes without their choosing to be. They simply appear in the scene they need to be in. This brings us to the last theme that drives this play, free will. It seems that Tom Stoppard is borrowing from the Beckett school of pessimism. Neither character ever really makes a choice, they are simply following the path that has been laid out before them. But making a choice in a world they don’t understand is ultimately too terrifying. The prospect of consequences overwhelms them and they cautiously and passively follow the seemingly paved road in front of them, which of course leads to their untimely deaths. Choices in a random and chaotic world feel meaningless and so they don’t make them.

Tom Stoppard’s genius is in his ability to hold onto thematic development while imbuing his work with exhilarating language and absurdist humor, and this production holds true to that genius. Director Geoff Elliott gets it. He has created a truly unique theatrical experience, along with scenic designer Frederica Nascimento and great costumes by Jenny Foldenauer we are wonderfully transported. The heightened nature of absurdity makes it laugh out loud funny, and by allowing the themes and ideas to build on one another, we are enraptured by every seemingly random thing that happens. So much so that when Rafael Goldstein gives Guildenstern’s final monologue, which he absolutely nails, we are given a catharsis that is almost opposite of what we expected. Goldstein is pretty great throughout as the more pragmatic and questioning Guildenstern. He is able to contain his desperation and allows him to become unnerved in a slow burn throughout the play. Kasey Mahaffy is spectacular as the more innocent Rosencrantz. He adds an adorable factor to his reactions and mannerisms that never distracts, but rather adds a layer to his already exceptional performance. The rest of the ensemble are also solid with Wesley Mann’s Player being a standout. He anchors the man’s bitterness and humor into an utterly human, loveably buffoonish has-been who provides the audience a sort of grounded lifeline to hold onto, until that too proves to be illusory.  Ah theatre!

Overall, this production stays true to the thrilling material and provides a wonderful, hilarious, thought-provoking, conversation starting night of theatre.

Rosencrantz and Guildenstern are Dead