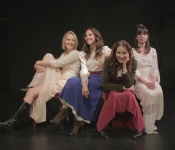 Ever wondered what it would be like if Lena Dunham wrote an updated version of Louisa May Alcott’s classic Little Women? Who hasn’t, right? That is what playwright Chiara Atik has done with her Fringe-favorite comedy Women, playing now through October 25 at Theatre Asylum. Presented by Beth Dies, Inc (spoiler alert…?) & Combined Artform, Women is a fast-paced, boisterous mash-up that seems at once a clever idea and a superfluous one.

While the springboard from Little Women to Girls seems less than obvious, there are similarities in the characters that were cleverly drawn. Bringing Alcott’s characters into a twenty-first century mindset, but still keeping the story in the 1860s, works as a statement on feminine identity much like the statements that the show Girls hits upon in every episode.

The story, mostly ripped from the book Little Women, deals with the March sisters. The youngest Amy (Jacquie Walters), wants to be “beautiful” when she grows up. She is an aspiring artist and speaks with an affected British Accent. Beth (Brigitte Valdez) an overly sweet and cheerful girl who only sees a black slate in her own future, and is always coughing for some reason. Meg (Erika Rankin) dreams of being a mother and a wife, and spends most of her time as a maternal figure to her little sisters. And finally Jo (Lauren Flans), is burdened by her expected role in society to marry and settle down, when all she wants to do is become a writer and live life as an adventure. Also, she’s pretty sure she’s a lesbian. Watching these sisters deal with the drama of their lives in the 1860s, but having the feminist awareness of women in the 21st century, don’t call them “little women,” makes for a ton of one-liners, easy allusions, and sometimes hilarious comparisons.

The makings are all there for an episode of the hit HBO show Girls.  Alcott’s book was sort of a precursor to the kind of feminist literature that would ridicule such stories for their lack of creating feminine identity outside of the home, or the role of dutiful daughter, wife, and mother. So this mash-up attempts to create a sort of satirical look at life for women in the late 19th century. However, it is less a satire and more an update, because the dialogue conveys the understanding of the situation, but the story surrenders to the themes of the book, and therefore ends up spoofing it. The conclusion to the play is almost the same as the book, and this is the result of the play’s understanding of the source material. This is meta-theater at its bluntest.  One character even references that for the sake of time and to wrap things up they should just go along with a preposterous plot development.

Most of the humor in the play comes directly from mocking the book. The references are broad enough that even someone who doesn’t know the book will know enough to get the jokes. The repetitive poking at Beth’s mysterious cough, for example, are funny up to a point. Luckily, this show embraces brevity, and so there has no time for anything to get stale or too redundant. Jo’s references about herself being, “one of the guys,” or the way she refers to neighbor Laurie (Clayton Farris) as “bro” becomes a running joke that plays upon the speculation that the literary version of Jo may have indeed been a lesbian.  There have been scholarly essays written about the sexuality of both Jo and Alcott, who claims to have based much of the book on her own childhood and sisters. The Jo of the book is a tomboy, a nonconforming girl who dislikes romance and who rejects convention. Modern interpretations lead one to believe she might have been a lesbian. Ms. Atik uses this and creates her Jo as much more than a tomboy, she thinks of herself as one of the boys.

In the modern theatrical world, there are many, many examples of feminist theatre, most predominantly, perhaps, is Caryl Churchill and her plays Top Girls and Cloud Nine. What makes this play work is that by mocking Little Women, and the traditional and limiting roles that women have played, and by its own awareness of such limitations, this play actually becomes a feminist piece. It’s flipping a cliché on its head that can sometimes resonate a message much louder than one that takes its subject too seriously.

Though not a deep meaningful play about women’s struggles, or sexual identity, or rebelling against social standards—though strangely it includes all of these—this is just a silly little show that will keep you smiling, if not laughing out loud.

All of the sisters are portrayed with appropriate melodramatic flair. As Meg, Erika Rankin is a whiz with her dialogue, she is able to handle her words with lighting speed, as well as her mood swings, which she is able to switch back and forth from in the blink of an eye.

Other standouts of the night include JB Waterman, who plays three roles, but excels as the scene-stealing, never-before-heard-of March brother, Carl. His dopey enthusiasm lights up the stage. Finally, as Jo, Lauren Flans is a perfect embodiment of a strong woman, a woman that perhaps Ms. Alcott wanted to write, but because of her time and circumstances wasn’t able to. She is a confused, and yearning soul who is a nice 1860s counterpart to 2014s Hanna from Girls.

Hardly a feminist odyssey, but kind of making fun of one, this play is a good bit of fun for anyone looking for a few easy laughs, and a couple well-earned ones.