An exploration of the double standards that existed between men and women in the late 1800s through the early 1900s can be heard in the crisp and crackling dialogue of Oscar Wilde’s A Woman of No Importance, playing now through December 20 at Sacred Fools Theater.

Wilde’s play, like his others, is a satire of upper-class English people. It is a direct attack on the views and social mores of a group of people who are so removed from the real world, that they are unable to understand differing opinions.

At a gathering at Lady Hunstanton’s (Cynthia Beckert) manor in the country, a group of friends have witty conversations and make absurd and often quite funny observations of the world around them. Among the guests is an American woman, Miss Hester Worsley (Christine Sage) who everyone secretly and derisively refers to as “the Puritan.” Ironically, she is the voice of reason. Also in attendance is a philandering and scheming Lord Illingworth (David Wilcox) and his new young secretary Gerald (Sean Gibson). Gerald and Hester are clearly enamored with each other, and they are absent from most of the conversation that dominates the first Act. We can imagine they are falling in love. Near the end of the first half, a woman in black enters the room, this woman is Mrs. Arbuthnot (Alexa Hamilton), and she has come to collect her son, Gerald. However, the presence of Lord Illingworth surprises and upsets her. We shall soon learn the reason why. The story abruptly changes from one of satire and comedy to a character exploration of a woman’s past catching up with her, and deeply affecting not only her but her son. And much like Wilde’s contemporaries, the theme of the sins of the parent being visited on his/her children becomes the pervading moral of this story.

This is perhaps Mr. Wilde’s most inconsistent play. It shifts focus for the final Act and becomes ladened with too heavy handed dialogue. The humor is almost completely absent from the last half hour, and it’s a slightly jarring shift. Somewhat redeemed by a terrific last line. 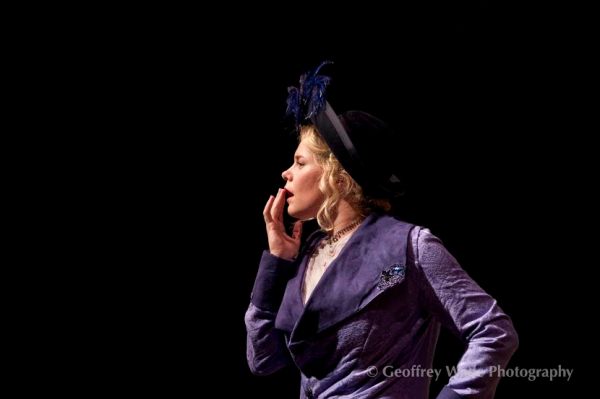 This production plays it very safe. Hitting the witty banter when necessary, and unfortunately falling into a maudlin and overdone final act. The set, designed by JR Bruce was nicely assembled, utilizing as much of the space as possible, to give the room an expansive feeling. The backdrop painted to look like an impressionist landscape adds some nice color variation. As do the costumes, designed by Linda Muggeridge. The many colors worn by the actors heightened the element of satire, and allows for a great contrast when Mrs. Arbuthnot enters in solid black.

Director Armina LaManna keeps most of the action on an even plane, which is mostly in the center of the stage. It makes for some rather extended moments. The furniture on the set is placed in such a way that at times everyone is sitting in a straight line across the stage, and this does nothing to help the tension or humor of any situation. It just feels like a line, a little flat. Ms. LaManna also has too many actors playing directly to each other, face to face, rather than opening up to the audience, and so we see the sides of their face more than the front. The satirical elements of this show come from the dialogue, but also from the exaggerated representation of the characters who are speaking this dialogue, and with only a couple of exceptions, these actors are not in a satire. 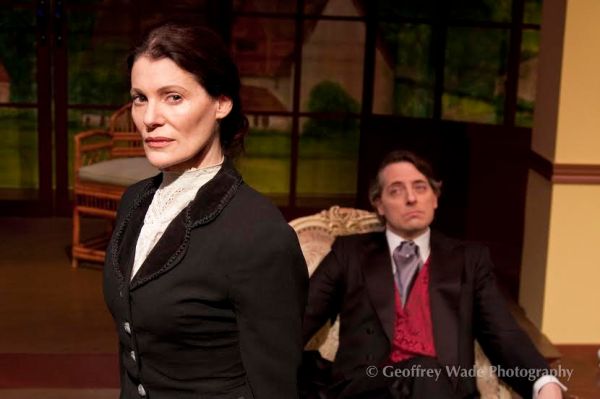 One exception is Cynthia Beckert as Lady Hunstanton. She embodies a very verbose, prudent, and slightly absent-minded member of the aristocracy. Even her accent propels the characters upper-class nature, and she is exceptional whenever she is on stage. Also as disgruntled husband Sir John Pontefract, Chairman Barnes is stoically hilarious. He has so few lines, and his reactions are small, but it’s the smallness of them that make them wondrous, and we are paying very close attention him.

The rest of the cast also has their strengths, but there are a few issues with dialects, and a few of the moments of drama are slightly strained by forced and uneven performances.

Overall, the show has its plusses and minuses, which can always be the case when any theater company takes on a challenging and very detailed period piece. It comes across in a very traditional way. It is still a good bit of fun, and anytime you get to spend an evening with the words of Oscar Wilde it just feels like time well spent.

A Woman of No Importance